The exact height of Everest remains a point of debate.

A Chinese survey team reached the summit of Mount Everest on Wednesday, as they attempt to remeasure the exact height of the world’s tallest mountain.

Having been delayed twice this month due to bad weather, the eight-member team set off from a camp at 8,300 metres (27,230 feet) at around 2.10am on Wednesday, reaching the peak after nearly nine hours, state media reported.

They stayed at the summit for a record 2½ hours while they put up a survey marker, installed a global navigation satellite system receiver, and used a snow-depth radar to collect data.

It is part of a comprehensive scientific survey of the mountain to determine its current height, and it is expected to take two to three months for researchers to collect, process and analyse the data.

Dang Yamin, director of the Institute of Geodesy and Geodynamics at the Chinese Academy of Surveying and Mapping, said a huge earthquake five years ago may have changed the mountain’s height.

“The exact impact of the 2015 earthquake in Nepal on Mount Everest is as yet unknown,” Dang told news site The Paper. “As one of the countries with sovereignty over Mount Everest, we have the responsibility and obligation to get a precise measurement, to give the world an accurate answer.”

Everest, known as Sagarmatha in Nepal and Qomolangma in Tibet, lies in the Himalayas on the Nepal-China border. Both China and Nepal cancelled the increasingly popular spring climbing season because of the coronavirus pandemic – meaning the Chinese team could be the only people to reach the summit this year.

Preparations for the survey began last year, and Wednesday’s ascent – covered in a live broadcast in China on state television station CGTN – coincided with the date Chinese surveyors first reached the peak to measure the mountain, on May 27, 1975.

China has conducted six major scientific surveys of Everest since the founding of the People’s Republic in 1949, including two height measurements – in 1975 and 2005. The United States, Italy and India have also conducted surveys and measured the peak, with different results.

Nepal has conducted its own surveys of Everest since 2017 and will hold a workshop with China to discuss the data and jointly determine the mountain’s exact height, the Nepalese embassy said earlier. 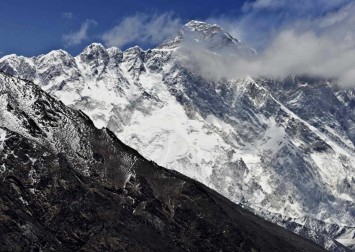 The two countries have long disputed whether measurements of the mountain should include its snowcap or be limited to the rock base. In 2005, a Chinese expedition measured the height at 8,844.43 metres, excluding snowfall.

That was declared by China to be the most accurate measurement to date. But Nepal has long held that Everest’s snowcap should be included, putting the iconic peak 4 metres higher at 8,848 metres, a height that is widely accepted.

However, geologists believe the snowcap may have shrunk by several centimetres after the magnitude 8.1 earthquake struck Nepal in 2015. Changing wind speeds are also believed to have had an effect.

Advances in measurement technology and mountaineering are expected to produce more precise results this time than in 2005, and the survey will also provide other data, including on glaciers.