A Shanghai couple who watched in horror as a rampaging elephant killed a Chinese tour guide during their vacation in Thailand have spoken of the tragedy for the first time.

Thai police are still looking into the circumstances surrounding the death of He Yongjie, 35, from Chongqing, who was trampled to death on Thursday in the tourist city of Pattaya.

However, the couple, who had been riding the elephant at the time, confirmed to Chinese media on Monday that they saw the mahout－the animal's keeper－strike the animal several times in the run-up to the attack. 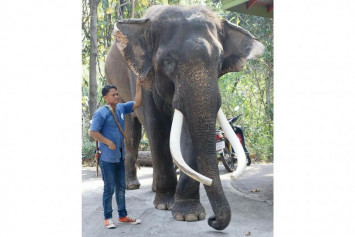 After setting off from an elephant camp in Bang Lamung district, the elephant stopped after walking only a dozen meters, the couple said in an interview with Chonging news website CQNews.

The mahout "first pulled the reins and then used his goad to whack the elephant's head", according to the husband, surnamed Zhu. He said the elephant started ramming a tree and rushing nearby crowds shortly after.

When the elephant knocked into a tourist bus, Zhu said his wife was thrown to the ground on the left hand side.

The giant animal lurched right, he said. "It hit someone, and the tour guide tried to drag the victim away," he recalled, adding that the elephant then grabbed He with his trunk and threw him to the ground before stomping on him several times.

Zhu said the attack lasted about 10 minutes. "The mahout, who remained atop the elephant the entire time, smacked the elephant's head seven or eight times during the rampage," he said.

The couple declined to comment when contacted by China Daily on Tuesday due to privacy concerns, but did confirm they had spoken to CQNews.

The couple's statement matches accounts given by other tourists from Chongqing.

Tian Maoxi, a member of the group He was leading that day, has produced a written statement of his experience of the tragedy, which has been signed by fellow tourists. He said he had hoped to submit the statement to Thai police, but they did not accept it. Instead, he gave it to the victim's wife. Feng Yi (right) pays respects on Monday to her husband, He Yongjie, a tour guide who was killed on Friday by a rampaging elephant in Pattaya, Thailand. Photo: Provided to China Daily/Asia News Network

In a Bangkok Post report, the mahout－identified as Au Bamrung, 37－was quoted as saying that the 17-year-old male elephant, named Plai Uthen, had been provoked by a tourist who pulled its tail.

According to China Global Television Network, local police said on Sunday the case is under investigation, but they said there was inadequate evidence to back up Bamrung's account. The elephant ride service was suspended on Friday.

The deceased man's family arrived in Pattaya on Friday. His cousin said the family has rejected a compensation offer of 400,000 yuan (S$82,038) from the elephant camp and a Thai insurance company, and is demanding to know what caused the incident, Southern Metropolis Daily reported.