A woman let her son urinate on the floor at the Forbidden City in Beijing.

Photographs of a Chinese tourist letting her infant son pee on the floor of the Forbidden City in Beijing have stirred up anger on Chinese social media as users criticised her behaviour.

The popular blog "What Beijingers Don't Know About Beijing" posted the images on Thursday alongside the caption: "There are so many public toilets in the Forbidden City they didn't use, and they threw the used tissue paper on the floor afterwards too."

Many people criticised the woman.

"This is a spoiled child, he will be doomed in future," one said on Weibo, China's Twitter-like service.

"The kid may have been desperate to use the toilet and his mother may not be familiar with where the toilets were," said another.

A worker at the tourist attraction told news outlet Beijing Time on Thursday that there were 14 public toilets on the site, and that additional temporary ones were added during the peak tourist season over the Lunar New Year holiday.

"We now have staff [on the lookout for such behaviour], they probably didn't discover that was happening at the time. If they saw her, they would have stopped her," the person said.

"The space is too big and we can't supervise all visitors, we can only patrol inside. This kind of incident happens very rarely.

"In this sort of situation where a small child is occasionally desperate for the toilet, we would definitely not order them to pay a fine but would tell them off and educate them, and make them clean it up."

Can an app clean up the overseas image of Chinese tourists?

The Forbidden City, formally known as The Palace Museum, received more than 17 million visitors last year, making it one of the most visited museums in the world. It was the former Chinese imperial palace from the Ming to the Qing dynasty.

During the recent holiday, it attracted more than 8.1 million visitors, Xinhua reported.

Mainland Chinese tourists have sparked anger in recent years for letting their children urinate in public.

Read Also
Where the world's worst tourists come from: You may be surprised 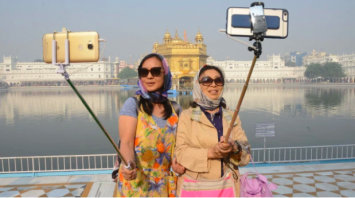 In 2014, a video of a couple letting their toddler urinate and defecate on a street in the Mong Kok area of Hong Kong went viral.

In 2013, two Chinese tourists were arrested for urinating in Sydney's botanical gardens.

Since 2015, Chinese President Xi Jinping has called for China's toilets in rural areas and tourist attractions to be upgraded into modern, hygienic facilities.

Authorities have since poured billions of yuan into China's "toilet revolution" to transform the image of public bathrooms.

About 68,000 toilets have been built or refurbished at tourist sites across the country since 2015. Another 64,000 are expected to be built by next year, under a national culture and tourism plan released late last year.