Dr Chen answered a call for medical assistance aboard a China Railway Nanning Group train, and staff demanded that she produce her licence.

China Railway Nanning Group apologised to medical professionals after train staff demanded that a doctor produce her licence as she treated a fellow passenger.

The physician, identified only as Chen, was on a train from Liuzhou to Nanning in Guangxi on Sunday when there was a call for a volunteer to attend an emergency, she told Jianghuai Medicine, a social media news source for medical professionals.

She went to the carriage and found a man in his 40s complaining of severe pain in his abdomen.

Chen asked the man for his medical history, checked his vital signs and examined him before concluding the passenger might have a gastrointestinal disorder. 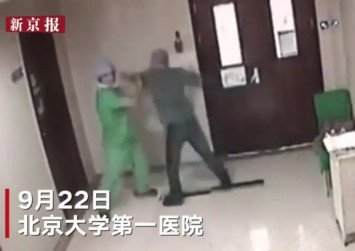 The man's condition improved after she gave him medicine from the train's first-aid kit. She then advised the traveller to go to hospital and request an ultrasound to rule out other conditions.

When Chen made her way back to her carriage, she was stopped by a conductor and asked for her medical licence. The doctor then realised the conductor had recorded her entire diagnosis and treatment.

Chen could not produce her licence, and the conductor asked her to write down her diagnosis, her name, address and signature and photographed her identity card and train ticket details.

On Jianghuai Medicine, Chen said she "felt terrible" after the questioning and "I may as well not step up in future if something similar happens".

On social media, some people agreed that a volunteer should be able to identify themselves, while others called for trust. One Weibo user said: "Should such appeals [for help] be changed to 'doctors with a medical licence on them please come to help'?"

Another asked: "Why not put medical staff on each train since no doctors would dare to come forward?"

On China Railway Nanning Group's Weibo feed, the company thanked the doctor for attending the patient and apologised for hurting her feelings.

"The staff did not communicate well with Dr Chen, causing a misunderstanding and creating bad feeling … The Nanning section of the group apologises to doctors and other medical professionals who have been participating in saving and treating patients," it said.

The group said it was not standard procedure to ask for a copy of a medical licence in such circumstances, and recording the treatment on video was for the benefit of the patient.