A university student who was studying in mainland China has admitted that he tried to kill four women in Hong Kong more than two years ago in the hope of getting a death sentence after multiple failed suicide attempts.

Liu Yueteng pleaded guilty to four counts of attempted murder in the High Court on Wednesday in relation to the random knife attack at Garden Hill in Sham Shui Po on October 11, 2019.

Asked by a court interpreter if he would admit the allegations against him, the 26-year-old lowered his head and responded softly in Mandarin: “I admit.”

Liu was a fourth year student at a mainland tertiary institution when he entered Hong Kong in 2019 with a two-way permit on October 1 – a day marked by official celebrations of the founding of the People’s Republic of China and widespread unrest in the city sparked by a now-withdrawn extradition bill.

The then 24-year-old checked in at a youth hostel beneath a hill named after the Garden Company, a local bakery whose former headquarters were situated nearby.

The student carried out the attack 10 days later, targeting four women who were exercising on the hillside that morning.

He first approached Lam King-king, 57 at the time, stabbing the woman in the neck and back with a fruit knife at around 10.10am after standing idle next to her for almost an hour.

Three other women fled after witnessing the attack, but Liu caught up and assaulted the trio before fleeing the scene by taxi. 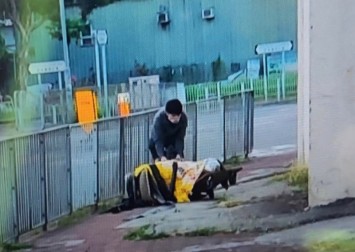 Wu Bodi and Liu Wenlian, both 50 at the time, suffered stab wounds on the neck and back, with the former also sustaining a slash on her abdomen. The other woman, Zhang Xuandi, then 54, was stabbed in the left side of her chest and slashed on her neck and left shoulder.

Liu crossed the border via Lo Wu with his passport later that day, after he lost his two-way permit. He dyed his hair neon-green before returning to Hong Kong on October 13 through the Shenzhen Bay control point, where police arrested him.

The student admitted he was the assailant in two subsequent interviews. He said he had planned his attack hoping to get the death penalty on the mainland, as he had failed to take his own life previously.

Knowing that there was no death penalty in Hong Kong, Liu said he had aimed for his victims’ vitals as he believed his wish would only be granted by killing people and entering a confession on the mainland.

The student claimed he had turned himself in to mainland public security authorities after the crime, but was told he would not be arrested for an offence committed across the border, so he returned to Hong Kong once again to seek jail time.

The court heard the four women did not suffer permanent physical injuries.

Lam, who had moved to the mainland after the incident, reported that she had experienced disturbed mood and occasional flashbacks of the attack, with a psychiatrist diagnosing her with delusional and post-traumatic stress disorders.

Attempted murder carries the same maximum penalty as murder, which is life imprisonment in Hong Kong.