Students wearing face masks are seen inside a classroom during a government-organised media tour at a high school as more students returned to campus following the coronavirus disease outbreak, in Shanghai, China on May 7, 2020.

University students in China are just as eager to learn more about death as sex, according to a new study by Chinese researchers.

More than 56 per cent of students surveyed said they needed death education, the same proportion as sought sexual education, according to a study of 262 students from five universities in Beijing.

Death is a taboo in Chinese culture. Bringing up the topic is regarded as inappropriate or rude in most circumstances.

"While you don't yet understand life, how can you understand death?" warned Confucius in The Analects.

Death education courses that are taught at some universities in China explain the biological process of death and teach some scientific methods for managing grief.

The findings suggested the Covid-19 pandemic and other worldwide unrest might have changed attitudes towards death among China's younger generation, said Sun Yingwei, a professor at Capital Medical University and lead scientist of the study, in a paper published in the domestic peer-reviewed journal Health Vocational Education on Feb 21.

"It is a good time to launch death education now," she added.

China produces more than eight million university graduates a year, twice as many as the US.

This higher education boom has been critical to China's rapidly developing economy and increasing competitiveness in the science and hi-tech sectors.

But having so many graduates has intensified competition in the job market. In recent years, topics such as "lying flat" - doing the bare minimum to get by - have been trending topics on Chinese social media because increasing numbers of young people say they can no longer live with anxiety.

About one per cent of Chinese university students have attempted suicide, and an important factor driving up the suicide rate is anxiety about death, according to some recent studies.

Death education could reduce fear and anxiety about the end of life, said Sun and her colleagues.

Only 20 per cent of the students said such a course was available to them. Courses teaching on general health, emergency response, security and relationships were commonly offered in a life education curriculum, but most students reported they had less interest in these topics. 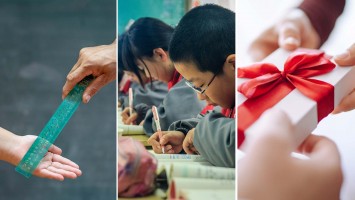 About 30 per cent of the students reported having access to sex education.

The mismatch between demand and supply raised the question of whether the Chinese universities could "effectively educate the students, who are the hope and future of our nation", Sun wrote in the paper.

In the same issue of Health Vocational Education journal, a joint study by researchers from Capital Medical University and the special medical centre of the People's Liberation Army Rocket Force - the military branch operating China's nuclear and conventional missiles - said Chinese society as a whole was not ready to cope with massive deaths.

Their survey, involving nearly 300 residents in two unnamed cities, produced a mediocre score (3.5 out of 5) on a popular scale known as the death attitude profile.

The participants in the study, aged 30 to 95, worried more about their family than themselves, according to the researchers.

But most found it difficult to talk about death with others, regardless of how close they were. This collective avoidance severely undermined Chinese people's ability to cope with death, according to the researchers.

A study by Tsinghua University researchers in 2017 warned that when a deadly event suddenly happened in China, the taboo could lead to a sudden explosion of emotions across society and create unpredictable consequences.