A social media "scandal" about a cat that was supposedly subjected to eye surgery to make it look cute has been described by a vet as "clearly nonsense".

The story began when pictures of the animal with stitches around its red, swollen eyes appeared online. The knee-jerk reaction from some internet users was to assume its owner - believed to be a woman from Nanjing in east China's Jiangsu province - had paid for the cat to have so-called double eyelid surgery.

Local broadcaster Jiangsu TV picked up the story and in its report on Wednesday said the woman - whom it did not identify - had spent 10,000 yuan (US$1,500) on the procedure, which is popular among East Asian people and involves the reshaping of the upper eyelid to create a crease in it.

The report included interviews with members of the public, many of whom were outraged by the alleged actions of the cat's owner.

Despite their protestations, veterinary surgeon Liu Xiaoou, who works at the AMC Veterinary Hospital in Nanjing, said on Thursday that the story was almost certainly fabricated "nonsense".

Giving his opinion of what the online images showed, he said: "It is clearly a surgery to treat an inverted eyelid."

"Do not say that it is cosmetic surgery, just to attract views and provoke the public," he wrote on Weibo, China's Twitter-like platform.

"The media these days is really stupid, unkind and without morals or sense."

Some social media users were quick to dismiss the TV report.

"After two days [the broadcaster] will say it got things wrong, the cat had surgery because of an ingrown eyelash," read a highly rated comment on Weibo.

A colleague of Liu's at the veterinary hospital was among those keen to debunk the report.

Speaking in a video shown on Pearvideo.com on Wednesday, the vet, surnamed Wu, said: "It is a stye surgery. From the photo, you can see that part of the upper and lower eyelids have been removed all the way to the corner of the eye.

"This kind of surgery would only be chosen in the case of an eye disease. For example, some breeds of dog, like the Shar Pei, are very prone to getting styes from ingrown eyelashes." 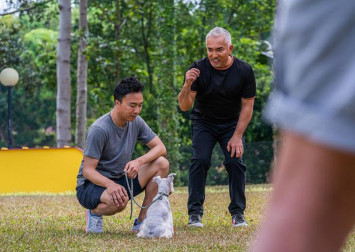 In the Jiangsu TV report, an unnamed vet was saying that cosmetic surgery was an option for animals.

"Cats can have double eyelid surgery," he said. "It has been done on dogs before, especially certain breeds or for dogs that are take part in competitions."

But Wu said the practice he worked for would never offer such a service.

"Veterinary medicine does not include cosmetic surgery," he said. "And cats naturally do not have a 'double eyelid'. Their eyes are already round."