One of the viral video clips showed an escaped leopard roaming through a tea plantation.

A wildlife park in the eastern Chinese city of Hangzhou reopened for visitors on Saturday after arousing national outrage when the random sighting of escaped leopards revealed a cover-up.

The Hangzhou Safari Park kept a low profile in its reopening, six months after it was closed, with no advertising or announcement. However, staff members said tickets have been discreetly available both offline and online.

After they escaped in April, two of the three leopards were captured in the hills near the park in Zhejiang province, but the third was not found after a month-long search. Many experts think it is likely dead because it lacked the necessary skills to survive independently.

The first cat was caught just two days after escaping the park, but it took longer to find the second one, which was finally captured on May 8.

Losing the three leopards sparked national outrage because there was a two-week lag between when the big cats escaped on April 19 and when the park announced that the animals were on the loose.

Between April 19 and the announcement in May, videos started circulating on social media, featuring clips of the leopards roaming through a tea plantation and another one showing a cat roaming the streets in a residential district.

According to a verdict released by the Fuyang District Court on Friday, three zookeepers and three managers received suspended jail sentences of between 14 and 24 months for failing to properly contain the leopards and the ensuing cover-up, which happened because the park was concerned about a drop in visitor numbers.

At the time, park operators actively denied the leopards had escaped when a reporter asked them about the cats. They only acknowledged the lie after the government got involved.

In the beginning, the search involved 1,700 personnel, 990 drones, dogs and live chickens used for bait, according to local authorities. 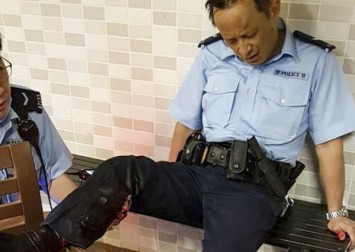 In an apology last spring, the park said that "the juvenile leopards are not very aggressive", and it decided to conceal their escape to avoid triggering a panic. "We are deeply remorseful and will sincerely accept criticism from the public," the park said in May.

Beijing News reported that the two cats are healthy.

"They have grown up and become chubby," Yuan Xiaoqin, vice-manager of the park's marketing department, was quoted as saying.

She said they weighed around 32.5kg and 40kg respectively when they were captured and had since grown to 50kg and 55kg.

The Hangzhou Safari Park is an extremely popular tourist attraction and can attract upwards of 50,000 visitors on its busiest days.