Zeng had injected a juice made from more than 20 types of fruit.

A woman in central China was so keen on staying healthy that she injected the juice of 20 types of fruit - and almost paid for it with her life, according to local media.

On a whim on February 22, while apparently in good health, Zeng made a juice from more than 20 kinds of fruit and gave herself an intravenous infusion by drip.

Despite feeling itchy and a rising temperature, she did nothing about it, but that night when her husband noticed her discomfort and found out about the infusion, she was taken to the county hospital. It in turn sent her to the Affiliated Hospital of Xiangnan University, where she was admitted to intensive care. 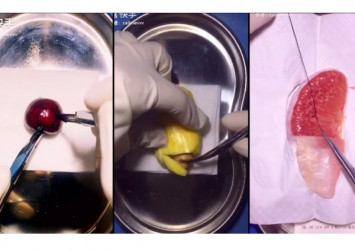 Liu Jianxiu, the attending doctor, told the Xiaoxiang Morning Herald that Zeng had a severe infection, damage to her liver, kidney and heart, and was in danger of dying of multiple organ failure and sepsis.

Doctors cleansed her blood using dialysis, injected clotting agents and gave her antibiotics. Zeng's condition had improved significantly after five days and she was transferred to a kidney unit.

"I had thought fresh fruits were very nutritious and it would not do me harm by injecting them into my body," Zeng was quoted as saying. "I had no idea that would get me into such trouble."

Liu warned against health practices that lack scientific basis, and said injecting into a vein could cause liver and kidney damage or even death.

The news prompted amazement on social media. Lu Zhongyi, a nutritionist in Beijing, said on Weibo, China's equivalent of Twitter, that some fruits were good for vein health but they should never be injected into the vein.

One person commented: "She who knows not fears not! I admire her courage as well as her intelligence!"

Others asked how Zeng had acquired a catheter and drip to conduct the procedure, while one wrote: "She is really someone who knows how to conduct intravenous injection and is brave enough to do it. Luckily her husband knows better. I am happy she survived."