Chinese zoo asks tourists not to feed cash to its animals after visitor throws $2,030 to giraffes

The money was thrown into the giraffe enclosure.

A wildlife park in southwestern China is looking for a visitor who tried to feed its giraffes almost US$1,500 (S$2,030) worth of cash.

Staff at the Yunnan Wildlife Park discovered on Tuesday that someone had thrown 10,000 yuan in banknotes into the giraffe enclosure and then disappeared, the park said later that day.

"Some tourists love to feed animals food when visiting zoos, but have you seen people who feed them renminbi?" the park said in a notice issued on WeChat, China's most popular social media platform.

The banknotes landed in the giraffe enclosure just before noon and staff had to distract the animals with food while they picked up the money, it said.

Nearly 10,000 yuan (S$2,021), mostly in 100 yuan notes, was retrieved. Staff then questioned visitors in the area but they all denied any knowledge of the incident, it said.

Surveillance camera footage showed that the money was thrown from a blind spot, it added.

"So far no one has come to claim ownership of the money. The police are also helping us look for the owner," a worker from the tourists' service centre told the South China Morning Post on Wednesday.

The park, on the outskirts of the provincial capital Kunming, also warned tourists against offering food or other objects to animals, a common occurrence in Chinese zoos and wildlife parks.

"As we search for the owner, may we also kindly advise tourists not to drop litter or feed animals 'strange things'?" the notice said. 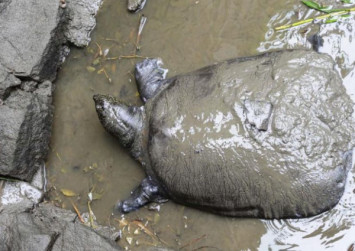 "Taking different food provided by tourists can give the animals nutritional disorders, and as a result influence their growth and reproduction. And if they eat objects that are indigestible, such as plastic bags, they can die or suffer life-threatening injuries."

The wildlife park said it was hoping to return the cash to its owner if he or she can be traced.