Cocaine worth $1 million seized from suspect, 61, at Hong Kong airport

Suspected cocaine worth HK$6 million (S$1 million) was found concealed in water filter cartridges in the luggage of a 61-year-old man at Hong Kong International Airport on Wednesday.

An initial investigation showed the Hong Kong resident was paid HK$50,000 to smuggle the 6.4kg haul into the city, according to senior inspector Yuen Ho-ting, of the force's Narcotics Bureau.

The suspect was stopped for inspection at the airport's clearance counter, with the support of customs officers, at about 8.30am, on his return to the city from Johannesburg in South Africa.

Three boxes carrying 12 water filter cartridges were found along with clothes in his luggage, according to police. 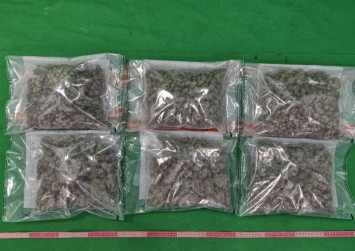 "Suspected cocaine was found hidden in the hollow centres of the water filter cartridges," Yuen said adding that each cartridge carried 530 grams of the drug.

He said a total of 6.36kg of suspected cocaine with an estimated street value of HK$6 million was found in the anti-narcotics operation.

No other drugs were found in a follow-up raid of the suspect's flat in Tuen Mun.

The senior inspector believed the consignment was for local consumption and officers were investigating the source of the drug.

As of 5pm, the suspect, who was arrested in connection with drug trafficking, was being held at the police headquarters in Wan Chai for questioning and had not been charged.

In Hong Kong, trafficking a dangerous drug carries a maximum penalty of life imprisonment and a HK$5 million fine.