A popular Chinese coconut milk manufacturer has again come under fire for adverts and packaging which claim that its beverage will make women's breasts grow bigger.

Photos of the women also feature on the drinks' distinctive black packaging, which was updated for 2019. Television commercials for the company - which made similar claims in adverts two years ago - also showed several large-chested women frolicking on a beach.

But viewers quickly voiced their doubts over whether coconut milk actually has any breast-enlarging properties. 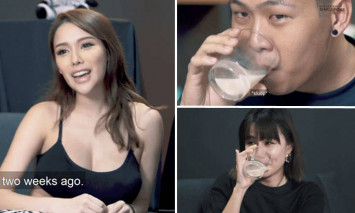 "When I first saw the advert, I thought some netizen had just Photoshopped it. It's only now that I realised it was actually true and not someone joking around," read one comment on Weibo, China's equivalent of Twitter.

Many Weibo users also expressed disappointment that a well-established brand would resort to such gimmicky marketing. "The old brand has been around for so many years, and still needs to do this!" one person wrote.

Slogans such as “drinking more coconut milk every day can make [your] breasts fuller” featured in the company’s advertising.Photo: Weibo

Coconut Palm was criticised for similar adverts for its coconut drink in 2017, when it also featured large-chested women in bikinis to promote its papaya juice, using the slogan "when I'm full of papaya I'm ample-chested".

The company, headquartered on the island of Hainan in southern China, has been making the drink since 1988. It was founded in 1956 to manufacture aluminium cans.

"I am from Hainan and ever since I was young, I can remember the black packaging seemed to remain the same and the taste stayed great too," wrote one Weibo user. "Every time someone praised the drink, I would feel quite proud. But I really don't want to mention this advert." A representative from the Coconut Palm factory in Hainan told Beijing Times on Tuesday the company was conducting an investigation into the matter.

The Industrial and Commercial Bureau of Longhua district in Haikou was also investigating and has removed some of the controversial adverts, state news agency Xinhua reported on Wednesday.

"Market regulatory departments will strictly, and in accordance with the law, carry out inspections and investigate any unlawful advertisements … to protect the legitimate interests of consumers," the report said. Coconut Palm has been criticised before for adverts focusing on breast size.  Photo: Weibo

"Tone-deaf" advertisements are still fairly common in China, but in recent years they have been met with a growing backlash from consumers.

In 2017, a Chinese commercial from Swedish furniture giant Ikea drew widespread criticism for showing a mother lambasting her single daughter for being a "leftover woman". The advert was later withdrawn and Ikea apologised.