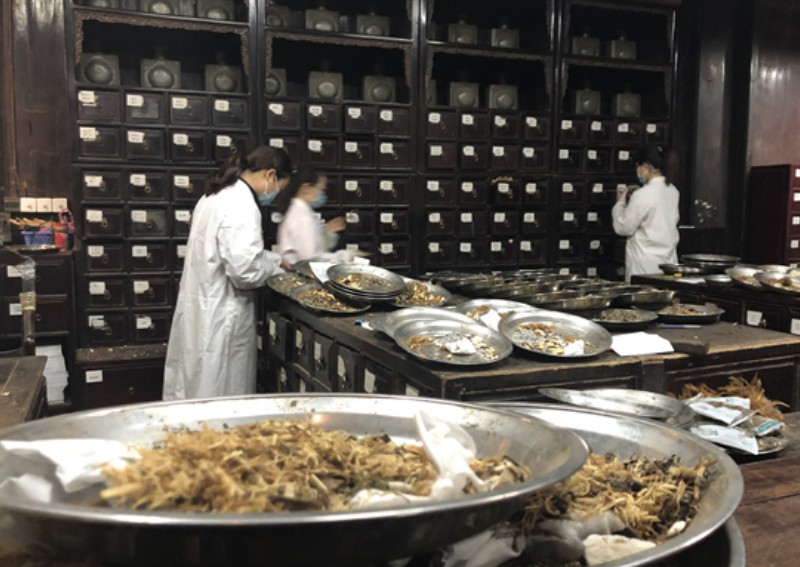 "A large number of clinical practices have confirmed the effect of the combined treatment of TCM and Western medicine on new coronavirus pneumonia patients," said Yu Yanhong, Party chief and deputy head of the administration who is also a member of the central government work group guiding the epidemic control effort in Hubei province.

She said TCM can rapidly improve the symptoms of mild patients, shorten the course of disease for patients with severe symptoms and reduce the possibility of mild infections from becoming severe.

Citing the latest clinical research on 102 patients with light symptoms, Yu said TCM treatment can shorten the average length of a patient's stay in hospital by 2.2 days while enhancing the recovery rate by 33 per cent compared with the control group.

The transfer rate from mild symptoms to severe symptoms dropped by 27.4 per cent, and the number of lymphocytes, an important indicator of the health condition of patients who are recovering, increased by 70 per cent, according to the clinical research.

Yu said the central leadership has paid great attention to the epidemic control work, and President Xi Jinping has made clear instructions to constantly improve the diagnosis and treatment plan and to integrate TCM with Western medicine in the treatment of the pneumonia.

"The early participation of TCM in the treatment of the novel coronavirus pneumonia has produced a notable effect," she said.

Administration data released on Monday showed that TCM had been applied to 60,107 infected patients, or 85.2 per cent, of the total infections nationwide.

In Guangdong province, 1,245 confirmed virus patients － or as many as 94 per cent of all the patients in the province － had received TCM treatment apart from Western medicine treatment by Tuesday, TCM experts said at a news conference in Guangzhou on Wednesday. TCM proved effective in 89 per cent of the cases, they added.

Yu said one herbal concoction, known as Qingfei Paidu Soup, which mixes ephedra and licorice root among other ingredients, has emerged as an effective prescription and has been listed in the latest diagnosis and treatment guide book.

Official data shows that as of Thursday, 3,200 trained TCM medical workers have participated in treating virus patients in Hubei province.