China on Sunday reported a double-digit rise in new coronavirus cases for the first time this month, as a city in the northeast of the country, which accounted for most of the new infections, raised its risk warning to the highest level and reintroduced a partial lockdown.

The National Health Commission (NHC) said 14 new cases were reported on the day - taking the total since the outbreak began to 82,901 - all but two of which were local transmissions.

There have been no reports of fatalities in mainland China for almost a month. The death toll stood at 4,633 on Sunday, with 148 people still receiving treatment.

Of the 12 domestic infections, one was in Wuhan, the city in which the now global health crisis was first identified. The case was the city's first since April 3, and before being tested the patient had not shown any symptoms of Covid-19, the health commission said.

The remaining 11 domestic cases were reported in Shulan, Jilin province, which borders North Korea, and where the authorities on Sunday raised the infection risk level to high, just a day after upgrading it from low to medium.

All of the new cases were linked to a 45-year-old woman who was diagnosed with Covid-19 on Thursday. While she is known to have been employed in the city police laundry, how she became infected remains unclear.

According to her contact tracing records, between April 23 and her infection being confirmed, the woman did not leave the province or have any contact with anyone returning from overseas or other parts of China where there had been recent cases of Covid-19, the Jilin health authority said.

Following her diagnosis, 18 of her close contacts were put in quarantine.

The spike in infections is bad news for the people of Shulan who are now facing a new round of restrictions just as most Chinese cities are reawakening from weeks of lockdown.

The central government on Friday gave the green light for cinemas, entertainment venues and sports facilities across the country to reopen - subject to individual approval and with limits on visitor numbers just a day after saying the nationwide Covid-19 risk level was low.

The Jilin government said in a statement on its website that it had ordered the closure of all but the most essential services in Shulan and instructed families to remain in their homes.

With the exception of medical and other essential workers, all residents are prohibited from leaving their properties, though one family member will be allowed out to buy daily necessities, it said. 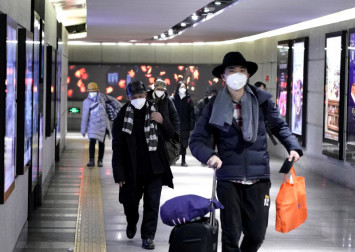 All bus services in Shulan have been halted, while taxis are prohibited from driving into or out of the city, and train services have been suspended until June 1.

Speaking at a press conference on Sunday, NHC spokesman Mi Feng described the situation in Shulan as the country's biggest cluster infection in the past two months.

He advised the city's residents to "maintain a high degree of vigilance, use personal protection and avoid large gatherings".

"If you have a fever, cough, fatigue or any other symptoms, go immediately to a designated hospital for screening," he said.