Coronavirus: Chinese people are dancing their thanks to pandemic workers, but the trend is more burden than gift

A woman dances in front of a line of pandemic workers in China, which has become common as the country battles Covid-19.

For China’s epidemic control workers, who usually spend long hours working in hazmat suits, a well-intentioned display of gratitude is proving to exacerbate frustrations rather than improve morale.

A slew of videos across China showed a trend of people dancing in front of the workers as the country continued with a massive testing push to curb a worsening Covid-19 outbreak driven by the Omicron variant. The government reported 20,472 cases on Tuesday, the most in China during the pandemic.

The dancers, who were often women and children but occasionally men, either brought a loudspeaker to play music or sing themselves. They said they wanted to entertain front-line workers and thank them for their hard work .

However, many workers did not appreciate the gesture, explaining that it either disrupted an already busy day or delayed their much-needed rest.

“They might mean well, but this is wasting our time. It would be impolite of us to stop them, but we are very busy. We just want to finish our job as soon as possible and go home,” said Tang Xuan, a nurse in Shanghai who has been collecting respiratory samples for nucleic acid tests in the past month.

“To me, the best way to express gratitude is to prepare for the test in advance, like getting their QR codes ready and cleaning their mouths, and leave as quickly as they can after the sample collection,” she said.

Wang Haiding, a police officer in Nanjing who has been ensuring order at an isolation facility, said he also met children who came to sing, dance or deliver milk tea, but it was “truly troublesome”.

“Do not come to sing or dance, especially sing, because it can be dangerous as you need to breathe harder when singing,” he wrote on Weibo, where he is known as Granny Jiangning and has nearly 6 million followers. 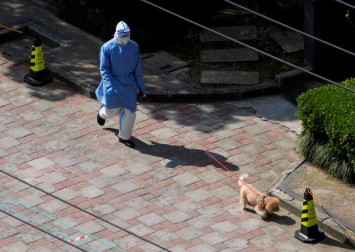 “Do not deliver food or drinks because, with the protective gear, we cannot eat or drink it,” he said.

In one video widely circulated on Douyin, a primary schoolgirl danced in front of a couple of sample collectors to a popular children’s song called “Listen to Me Saying Thank You”, before bowing to them and saying thanks.

But the dance was widely ridiculed as many people saw it as a disruption to testing and a publicity stunt.

“I think it is 99 per cent likely that she danced because her school made her, because my niece went dancing too, and her parents had to take photos to prove to the teachers that they went,” one person commented on Weibo.