Coronavirus: Unconfirmed cases may be behind rapid spread in China, researchers say

Recovered patients line up to be tested again at a hospital in Wuhan on Saturday. Researchers found unrecognised cases “can expose a far greater portion of the population to the virus than would otherwise occur”.

A joint study by experts in China, the US, Britain and Hong Kong found that undocumented infections of the new coronavirus, likely those without severe symptoms, were largely responsible for its spread across China in January.

The modelling research published on Monday in Science magazine - run by the American Association for the Advancement of Science - estimated that 86 per cent of infections in the mainland were not documented in the two weeks before Wuhan, the outbreak epicentre, was locked down on Jan 23.

While the undocumented cases of the pneumonia-like illness were about half as contagious as the documented patients - or those with severe enough symptoms to be confirmed with the virus - they were the source of infection for 79 per cent of documented ones, according to the study.

"These undocumented infections often experience mild, limited, or no symptoms and hence go unrecognised, and, depending on their contagiousness and numbers, can expose a far greater portion of the population to the virus than would otherwise occur," the specialists from Columbia University, the University of Hong Kong, Imperial College London, Tsinghua University, and the University of California, Davis wrote in the report.

"This high proportion of undocumented infections, many of whom were likely not severely symptomatic, appears to have facilitated the rapid spread of the virus throughout China," it added.

The coronavirus outbreak that began in Wuhan in December has become a global pandemic, with more than 183,000 people infected and over 7,100 killed worldwide.

As scientists have scrambled to learn more about the virus and its transmission, governments have taken unprecedented measures to contain its spread, including travel bans and the lockdown of entire cities and even countries.

The study published in Science also used a model-inference framework to compare infections in China in the two weeks before and after Wuhan was locked down, finding that the rate of transmission for undocumented infections was "substantially reduced" after the travel restrictions were put in place.

And using a model that cut 98 per cent of travel in and out of Wuhan, along with 80 per cent of travel between other cities, the researchers found the time between patients being confirmed with the virus and first developing symptoms was reduced from 10 days to six.

Li Ruiyun, lead author of the study and a research associate at Imperial College London's infectious disease epidemiology department, said control measures such as travel restrictions, rapid tests and detection, and increased personal protective behaviour were necessary to identify and isolate undocumented cases, and to reduce the overall spread of the virus.

"Therefore, they may spread the virus during travelling. Travel restrictions could greatly reduce these travels, preventing further spread." 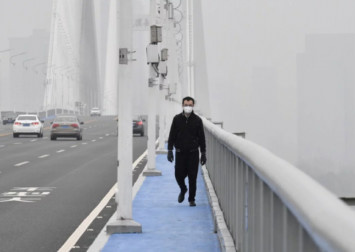 Transmission from undocumented cases could be further slowed with more testing and greater public awareness, which translate to behaviours such as wearing face masks, Li said.

"The success of all these measures in China provides a good example to other countries," she said. "Although the proportion and contagiousness of undocumented cases could differ in different countries, the prompt interventions by using these measures should be prioritised."

The experts also warned in the study that the new virus had the potential to become the fifth endemic coronavirus, adding to four existing strains - 229E, HKU1, NL63, OC43 - currently circulating among humans.

Public health experts have mixed views about the efficacy of travel restrictions to stop the outbreak, which the World Health Organisation has generally advised against.

Meru Sheel, an infectious disease epidemiologist at the Australian National University, said there was limited evidence that travel restrictions were effective, and it was unclear how successful control measures had been for the coronavirus pandemic.

"Travel restrictions, from what we know, may not delay an outbreak, but they definitely don't prevent outbreaks," she said.

"But what we will see in this scenario is completely different, that this is a new disease, and we are still learning how to contain it, so we will have to wait and see," she added.