Medical personnel in Wuhan, outfitted in protective suits as they battle the coronavirus outbreak, wear diapers as they work through gruelling shifts, often until skin irritation from their masks leaves bloody marks on their faces, a news briefing was told on Wednesday.

"When doctors and nurses are in the ward," dressed in protective clothing that seals them off from the environment, "they cannot eat, drink or go to the bathroom", Han Ding, deputy director of the Peking Union Medical College Hospital in Beijing, told reporters in Wuhan, the epicentre of the outbreak.

"Just in case they must urinate, they [wear a] diaper, and wash up after they're done with their shift," he said.

Han is one of hundreds of doctors brought in from beyond Wuhan to support the round-the-clock fight against the coronavirus.

So far, the disease has killed 1,115 people worldwide, with all but two of the deaths in mainland China.

Also known as novel coronavirus, or Covid-19, the illness had infected more than 45,000 globally as of Tuesday.

Leaders of medical teams described the difficult working conditions during the daily briefing held by the government of Hubei, the central China province in which Wuhan is located.

"Sometimes I want to itch, but we absolutely cannot do that, so we just have to bear it.

"Our doctors and nurses all have signs of irritation and even bloody marks on the bridges of their noses. These are the conditions of their work."

Han said medical staff were working around the clock to care for those in the most critical condition.

Nurses were putting in 4-6 hour shifts in intensive care units, while doctors were working from 6-8 hours, though shifts could go even longer, he said.

"Doctors and nurses are wearing their equipment so long you can see the marks on their faces," said Zhou Jun, party secretary of the China-Japan Friendship Hospital in Beijing.

Zhou, who serves at Tongji hospital in Wuhan, said medical staff were doing all they could to save lives, given limited supplies.

Advanced equipment brought in from around the nation is playing a critical role in the struggle with the virus, Ma said. 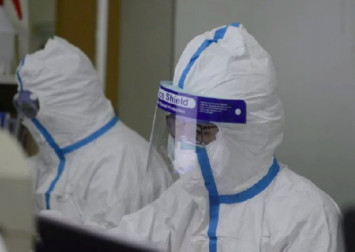 "In the absence of specific medicines [for the virus], ventilators and ECMO are of great importance in the treatment," he said.

He was referring to ECMO machines, which circulate a patient's blood through an artificial lung, giving the lungs of those in the most critical condition an opportunity to rest and recover.

Respirators, artificial lung machines and other equipment also play a vital role in keeping the death rate from climbing higher.

Zhou said his team brought with them 15 million yuan (S$3 million) of cutting-edge equipment from Beijing, including not only ECMO machines but ventilators, monitors, bronchoscopes and other devices.

"Some of this equipment is very expensive, but plays a critical role in curing patients," Zhou said.

"The most important thing is to reduce the death rate, and increase the rate of those cured."

The World Health Organisation, seeking to distinguish the virus from the disease it causes, said on Tuesday that it had named the virus SARS-CoV-2, and the disease Covid-19.