Schools in China are not supposed to dispense corporal punishment, but there has been uncertainty over the scope of the term.

Seven-year-old Haohao changed primary school this summer after spending his first year being taught by a teacher who his father believed had a propensity for violence.

Haohao was often pinched on the face or leg for failing to finish his homework on time or talking in class at Kaixuan Primary School in Linyi county, in eastern China's Shandong province, according to his father Zhang Zhaobao.

"I'm OK with some minor punishment as a warning to my son, but this was too much, and she didn't communicate with us in advance," Zhang said, referring to Haohao's head teacher, whom he declined to name.

Corporal punishment - inflicting physical pain - is banned in Chinese schools, but this traditional way of forcing students to be obedient and study diligently still exists, as Haohao has experienced.

It is an issue provoking fresh debate. There is no law in China specifying what constitutes corporal punishment or how it should be supervised - only directives from the education ministry and local education departments.

However, lawmakers in the southern Guangdong province, prompted by a central government directive, are considering a draft regulation to legalise some commonly used measures. 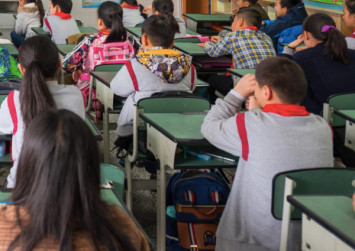 Under the proposed regulation, teachers at primary and secondary schools could use standing in front of the class, or jogging, as a punishment for behaviour including throwing hard objects, pushing, making excessive noise and plagiarising homework.

In a poll by Southern Daily on Weibo, China's equivalent of Twitter, over two thirds of the 28,000 respondents said they did not consider those sanctions to amount to corporal punishment.

In the southwestern Sichuan province, more than 80 per cent of about 1,000 respondents in a poll by Chengdu Business News said they supported teachers punishing students within the law.

However, many parents are worried by ambiguity over how far a teacher is entitled to go.

Zhang said he would spank Haohao when he did something terrible, and would generally consider it acceptable for his son to be sent to stand in a corner at school.

But he said Haohao's teacher "would let him stand in the hallway for a whole morning. He then wouldn't know what his homework for that day was, and as a result couldn't hand in the homework the next day, which led to another round of punishment".

Jessica Liu, whose nine-year-old daughter attends a primary school in central Shanghai, said things were "better now" than in her schooldays. 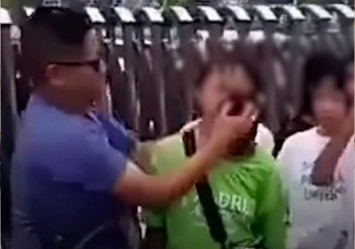 "When I was young, every classroom had a bamboo stick called a 'teaching stick', used by the teacher to point to the blackboard," Liu said.

"But another important function of this stick was to punish those who were disobedient. They would be hit on the head. This would be unimaginable today."

Maggie Zeng, mother of a grade-eight student in Shenzhen, said she once helped her daughter do her homework because she feared the daughter would be punished if she could not hand it in on time.

"At the start of her junior middle school [grade seven], her teacher would order students to do squats, 80 or 100 times, if they didn't deliver homework on time," she said.

"Now he has stopped that and uses other measures, like cleaning the classroom or the blackboard, which is fine to me.

"I think it's difficult for a teacher to judge precisely a student's physical condition, so there is the possibility of damaging their health. A student who had not eaten breakfast, which the teacher would be unaware of, might pass out if they were ordered to run in the morning."

Cases of mistreatment of school and even kindergarten pupils have infuriated the public, but the government is trying to ensure teachers have authority by giving them the right to hand out punishments.

"There is a consensus that teachers ought to take disciplinary action against students, but how to do it remains a difficult question," Xiong Bingqi, deputy director of think tank 21st Century Education Research Institute, said.

Xiong said local authorities needed to be more specific on what kinds of behaviour should lead to punishment, the extent of the punishment and who should supervise the process.

Without clarification, there would be concerns from both parents and teachers, he said.

"Parents may be worried about teachers abusing their power, while teachers may turn a blind eye to those who breach discipline because they fear being accused of violating a code of conduct," he said.

Shen Hongxia, a teacher from a school in Hangzhou, in eastern China's Zhejiang province, felt it was becoming more difficult to be a teacher.

"I think corporal punishment is somehow necessary, but many teachers have been punished themselves for punishing students," she said.

The school's management had "mentioned the issue" once or twice in meetings, Shen said. They had warned teachers not to "go too far" or "arouse the attention of passers-by", given the school was beside a major road.

Shen favoured asking misbehaving pupils to choose a punishment from running, cleaning the classroom or copying English words, and said that she had yet to receive any complaints from parents.

"I share the common rationale of teachers: that if I punish you, it is because I care about you," she said. "Those I'm totally disappointed with, I won't say a word to."

Zhang, however, said the coldness of Haohao's teacher had been a factor in his decision to move the boy to another school. He said Haohao had fared better since the move but was receiving regular psychological treatment.

"What sickened me most is that she asked other students not to talk to my son," he said. "She tried to isolate the child.

"He used to be happy and outgoing, but he has become very sensitive. Other kids beg their parents to play with them, but it's the opposite in my home. Every day after work, I beg him to play with me, to cheer him up."