A woman who goes by the name He Yuxiu said she was fired from a school when they found out she caught Covid-19 months ago.

A Chinese woman has claimed a school in north China fired her from her new teaching position after administrators learned she was once infected with Covid-19 when she lived in Ukraine, despite dozens of tests showing she has recovered.

The woman, a social media influencer who goes by the pseudonym He Yuxiu, was hired as a Russian-language teacher at a school in Hebei province a few weeks ago.

She said she was fired immediately after admitting she had caught Covid-19 in February, she complained on multiple platforms on Sunday (May 29).

She, a Chinese citizen who studied for her master's degree in Ukraine, fled the country in mid-March after the Russian military invaded Ukraine on Feb 24.

In a video explaining her predicament she said she had contracted Omicron in Kharkiv, Ukraine's second-largest city, where she lived, and tested positive again during quarantine upon arriving in China. She was taken to hospital in China after her positive test and had taken at least 50 nucleic acid tests since returning to China.

"I thought since they released me and gave me a green health code, I should be a normal person, live a normal life and start a new chapter in life," she said in the video.

"I have recovered. Since I returned, I have taken about 50 or 60 tests," said He, who has hundreds of thousands of followers on various Chinese social media platforms. 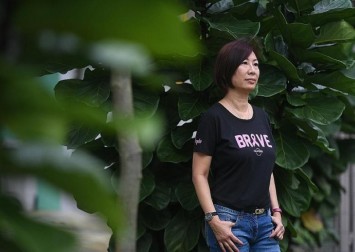 He said she received a phone call a few weeks after she was hired by the school, asking whether she had ever contracted Covid-19.

"I was required to leave the school immediately after I said 'yes'," she said. "It never occurred to me that I would lose my first job because of this."

She said she was concerned that she would be unemployable because she had caught Covid-19 once, adding that friends had stopped hanging out with her when they discovered she had contracted the virus.

"I hope society can show more tolerance and understanding to former Covid-19 patients," she urged.

The video, which received over eight million views on Weibo by Tuesday morning, generated heated discussion about discrimination against recovered Covid-19 patients, a persistent issue in China since the early stage of the pandemic.

"They are experiencing even more discrimination than criminals," one user commented.

Another asked: "She is someone who has some influence online. What if the same thing happened to other people? What should ordinary people who caught the virus do when something like this occurs?"