The popularity of hanfu, traditional Chinese dress, has boomed in recent years, particuarly among younger generations who are embracing Chinese culture and identity.

Decades ago as a young boy, Zhao Bo loved travelling with his tailor father on visits to ancient towns and villages across China collecting traditional clothes once worn by their Han Chinese ancestors.

The 35-year-old comes from a family of tailors in northern China and has continued his father's passion as an adult, collecting more than 2,000 pieces of ancient clothing, and reproduced dozens more by studying antiquities and ancient books.

Zhao now heads a museum in Yongqing, Hebei province, northern China, showcasing antique garments, some more than 500 years old, and handmade replicas of outfits dating back to more than 2,000 years ago,

An intangible cultural inheritor appointed by the Hebei provincial government to promote Chinese culture, Zhao is a part of a growing movement among younger Chinese that has helped revive hanfu, the name given to clothing once worn by ancient Han Chinese.

Annual sales of hanfu clothing have leapt from around 190 million yuan (S$38 million) in 2015 to more than 10 billion yuan last year, according to Chinese data analysis firm iiMedia Research.

The firm forecasts the hanfu market will grow to 12.5 billion yuan this year - up 65 times since 2015, despite an overall economic slowdown in China.

"People barely talked about hanfu when I opened my museum in 2014," said Zhao. "They didn't even know whether it meant clothes worn by the Han Chinese throughout history, or clothes specifically worn during the Han dynasty."

"But about three years ago I started feeling a craze, especially among the youth, unlike before when hanfu fans were often older people," he said.

People wearing hanfu -style dress has become a common sight on the streets of major Chinese cities in recent years as increasing numbers of teenagers and young adults turn to the outfits as both a statement of fashion and cultural identity.

Hanfu covers clothes worn during a number of China's historical periods. The most popular styles are from the Tang, Song, and Ming dynasties. The Ming was the last native Han Chinese dynasty to rule China before the Manchu seized power in 1636 and formed the Qing dynasty that lasted until 1911.

Hanfu often consists of a flowing robe in beautiful shades of colour and a skirt with intricate embroidery.

Zhao said the in-vogue hanfu attire seen on the streets of China today is not exactly what ancient Han people once wore. However, he said it remains a positive promotion of the more authentic hanfu clothing displayed at places like his museum.

"Only when there's great interest from the public will there be people who bother to learn more about hanfu and make it historically accurate," he said.

As China's leaders have pushed for a stronger sense of national Chinese identity and renewed cultural confidence in recent years, hanfu has become a visual symbol of China's renaissance.

Fashion-conscious youth in mainland China have enjoyed the official promotion and turned hanfu cosplay into a way to express themselves and to connect with history and tradition.

Lisa Zhou, a 17-year-old high school student from Shanghai, said she was fascinated by hanfu after seeing videos on social media where girls "look like fairies" in historical attire.

She was also influenced by enthusiasts from her school who formed a hanfu club, something no school had several years ago, she said.

But the teenager pointed out that she doesn't just like the clothing because it looks pretty, but it also represents China's cultural heritage.

It was for this reason that she wore a hanfu outfit to a recent family gathering, she said.

Read Also
'You are Chinese, aren't you?' Shock after kimono-clad woman cosplaying as manga character is detained by police 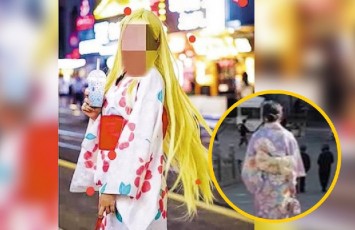 Such attitudes are common among Zhou's peers, according to the iiMedia report. Nearly 70 per cent of hanfu enthusiasts surveyed said the top reason they wore the garments was to "promote Chinese culture", with "looking good" listed as a secondary concern by many.

Despite its rising popularity, most hanfu fans tend to only wear the outfits for photo shoots with friends and at traditional festivals, the report said. Only about 20 per cent of them have worn hanfu in their daily lives.

Zhao, who wears adapted hanfu on a daily basis, said the best way to preserve tradition was to adapt it to modern life.

"The government has vowed to build China into a major cultural power by 2035. There are still more than 10 years to go, and I believe during this period we'll see a continuous surge in traditional clothing," he said.

"We won't call ourselves a cultural power while wearing a suit and tie, will we?" he said.