The decision of a Chinese university graduate to take a job in a cemetery to achieve a better work-life balance and avoid office politics has shocked many and triggered an online debate on the work preferences of Generation Z in China.

"Let me show you the working environment of a Gen Z grave keeper. It's a simple and cushy job. There are cats and dogs and the internet," said Tan, who lives in an onsite dormitory with her colleagues.

Describing the position as "a life of early retirement", she said the job offers ample leisure time, a scenic view and an environment free from office politics – not to mention no long commute.

"Because I live here, I jokingly call myself a 'grave keeper,'" she said.

Her duties include receiving guests, selling tombs and sweeping graves on behalf of relatives of the deceased.

According to government data, the average annual income in Chongqing last year was 33,800 yuan, which roughly translates to 2,800 yuan a month.

Her video went viral and many netizens were surprised that, as a fresh graduate, Tan chose such a job given that cemeteries are generally considered unlucky and unpleasant places to work.

But an even greater number of netizens reacted with empathy and support, perhaps reflecting a growing culture of "slacking off" at work among Gen Zs on the mainland. 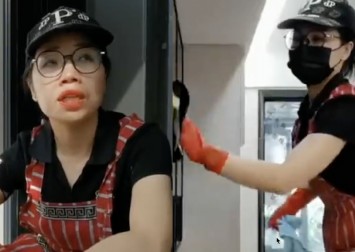 Chinese society has witnessed a social movement of "lying flat", or tangping, in recent years as young people embrace the mentality of doing the bare minimum to get by as a protest against long hours and unrealistic expectations.

"Such a job was regarded as unlucky in the old days but is a peaceful one to modern people," one of the most-liked comments under Tan's video read.

"I like this job too. You don't need to deal with people, and there's no office politics," another popular comment read.

Having majored in burial and cemetery management in university, Tan replied that it was also a natural job for her.

"This is just an ordinary job. I am just doing something that I find ordinary," she said.

"I am satisfied with my life at the moment and I will stick with this job," she added.

China's funeral service market has expanded significantly in recent years as the population ages rapidly. In 2020, it was valued at 257 billion yuan, according to Chinese research firm Huajing Research.