China has reported an outbreak of the deadly H5N1 bird flu in Hunan province, which lies on the southern border of Hubei province, the epicentre of the rapidly spreading coronavirus.

"The outbreak occurred in a farm in the Shuangqing district of Shaoyang city. The farm has 7,850 chickens, and 4,500 of the chickens have died from the contagion. Local authorities have culled 17,828 poultry after the outbreak," according to a statement by China's Ministry of Agriculture and Rural Affairs on Saturday.

No human cases of the Hunan H5N1 virus has been reported.

The Hunan H5N1 outbreak comes even as the Chinese authorities continue to scramble to contain the spread of the novel coronavirus, further stretching the nation's already heavily strained resources needed to combat the health threats.

The deadly coronavirus infection had claimed 259 lives in China as of Saturday. So far, no deaths have been reported outside the country. The virus has sickened more than 11,900 in China and about 140 overseas so far.

The H5N1 avian flu virus, often called bird flu, causes severe respiratory disease in birds and is contagious to humans. The virus was first detected in 1996 in geese in China and is especially deadly for poultry.

It is possible, but difficult, to transmit bird flu from person to person, according to the World Health Organisation (WHO).

According to the US Centres for Disease Control and Prevention, "Most human infections with avian influenza viruses … have occurred after prolonged and close contact with infected birds.

"Rare human-to-human spread with this virus has occurred, but it has not been sustained and no community spread of this virus has ever been identified."

In recent days, more than a dozen countries have evacuated their citizens from Hubei province's Wuhan - the epicentre of the coronvavirus outbreak - or are in the processing of doing so. 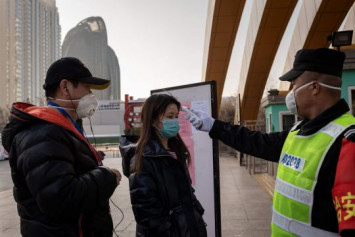 On Thursday the World Health Organisation (WHO) declared the coronavirus outbreak a global public health emergency.

Since then, the United States, the European Union, Russia, Australia and Singapore have banned or restricted the entry of Chinese citizens, and any foreigners that had recently visited China. Most major airlines have temporarily suspended all flights to mainland China.