A gay teenager was subjected to months of emotional and physical bullying, including repeated instances of sexual assault, at a school in China.

In the most severe incident Xiaohao (not his real name) was stripped naked, pinned to the ground and forced to watch pornography while someone stimulated his genitals while being filmed.

During the assault he recalled one attacker asking, "Shouldn't this give you pleasure since you are gay?"

Xiaohao, who made his experience public last Saturday, routinely asked for help from the school administrators, who told him to endure it.

"I am a homosexual. My dorm-mates bullied me. But the teachers asked me to put up with them and suggested I should drop out of the school," he wrote on an online student helpline forum, hoping the publicity would bring help.

Xiaohao, 16, left the school but tried to commit suicide a few months later in a desperate cry for help.

After the suicide attempt, Xiaohao’s was diagnosed with severe depression in late February.

"This is quite a typical case," said Bin Xu, co-founder of Rainbow Anti-Gender-Based-Violence Center, a nonprofit providing legal and social service support to LGBT people who is providing support to Xiaohao. 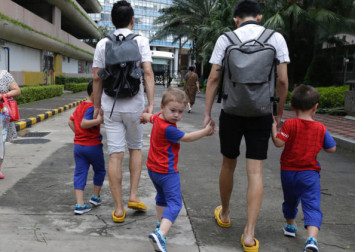 Despite severe bullying, such as pouring cologne on Xiaohao's lower body or repeatedly filming him getting undressed, the school, named the Beijing Water Conservancy School, only gave the perpetrators a slap on the wrist.

The only punishment was to ask the eight students involved in bullying Xiaohao to write self-criticism letters and transcribe rules for student behaviour.

When contacted, the school said it is now working with the police and has created a dedicated group to investigate the matter.

Xiaohao's plight exposed a systemic problem in Chinese state-run public schools that tightly control which third-party support groups and organisations can enter the school, meaning students have to rely on administrators to seek help when they are in trouble.

The lack of independent aid workers in schools, and few if any courses for students about anti-bullying and gender and sexual diversity, has created a vacuum that abetted homophobic students and left people like Xiaohao to fall through the cracks, according to experts interviewed by the Post.

Zhu Bao, a Beijing-based attorney who has represented gay clients in China since 2013, said a structural change at school would help address school bullying more than calling the police.

"It's unrealistic for public security forces to monitor those cases constantly. You have to allow nonprofit organisations to work with schools to manage it," Zhu said. "Because even if you solve this one case by arresting those boys, you won't be able to help other cases that are happening."

A 2016 research from Tongyu, a nonprofit organisation established in 2005 and promotes equal rights in China, showed that school bullying is common and LGBT students often feel isolated.

Out of 3,452 participants enrolled in schools, more than 40 per cent said they have seen bullying acts targeting sexual minorities. 23 per cent of LGBT students said they have no LGBT friends at the school and 63 per cent of heterosexual students don't know anyone with a different sexual orientation.

On Monday, Xiaohao told local news outlet Hongxing News that he hopes these eight students will get the punishment they deserve and he is planning on suing them.