Sun Lijun, a former Chinese vice-minister of police, has been sacked and expelled from the Communist Party, and will face trial for “serious violation of discipline rules and law”, state media reported on Thursday (Sept 30).

“To achieve his political objectives ... [he] resorted to whatever means ... forming gangs and factions, seizing control of key [security] departments, seriously undermining the unity of the party, and causing extreme danger to the political security [of the party].”

The report said Sun, 52, “had secretly possessed a large amount of confidential materials, and engaged in superstitious activities for a long time”.

“[For a long period of time, Sun] lived a decadent life, accepting huge amounts of bribes and expensive gifts ... [He] is a man with no morals, trading power for money and sex,” it said.

The report said Sun, who was investigated for 17 months from April last year, resisted the investigation and “did not explain [his] problems truthfully” to the investigators.

“After deliberation, the CCDI Standing Committee ... decided to expel Sun Lijun from the party, and he is dismissed from his official position,” the report said.

“His case has been transferred to prosecutors who will arrange for a trial in accordance with the law.”

Sun was the deputy head of a high-level team sent by Beijing to the central city Wuhan of Hubei province in February 2020 to help contain the Covid-19 outbreak.

When President Xi Jinping visited Wuhan in March that year, Sun was shown on national television reporting to the president about the pandemic. He was arrested a month later.

Sun was the personal aide to former security tsar Meng Jianzhu, who was head of the Central Political and Legal Affairs Commission from 2012 to 2017. 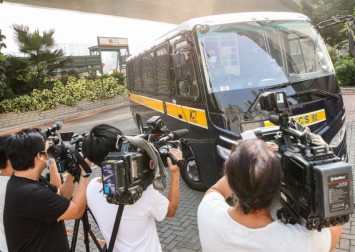 He was later promoted to lead the powerful First Bureau within the Ministry of Public Security, looking after China’s domestic security as well as security matters for Hong Kong and Macau.

He graduated from Shanghai International Studies University majoring in English before gaining a master’s degree in public health and urban management from the University of New South Wales in Australia.

A string of top security officials have been brought down in China in recent years.

Sun’s fall followed the high-profile disappearance of former Interpol president Meng Hongwei on a trip back to China in 2018. Meng Hongwei, who was also a deputy security minister, was jailed for 13 years in January for corruption.

Deng was accused of taking 43 million yuan (S$9.1 million) in bribes and Gong 73 million yuan. Both pleaded guilty to the charges and are awaiting sentencing.