A handout photo. A Chinese academic stole the work of at least 10 academics, including a close colleague for her master's dissertation, renewing debate on widespread fraud in China's tertiary sector.

The deputy dean of a university in China has been stripped of her master's degree and faces further disciplinary action for dissertation plagiarism, in the latest case of academic misconduct in the country.

Zhang Yan, from the Kunming Railway Vocational and Technical College in Yunnan province, southwestern China, was stripped of her degree after an investigation found at least one-quarter of her master's dissertation was stolen from research papers published by other academics, according to the university.

"We will take this seriously and act according to regulations," a staff member of the university told the South China Morning Post on Thursday (June 2).

Zhang is accused of stealing from nearly 10 researchers, including a close colleague of hers surnamed Li, for her 2018 master's dissertation.

The plagiarism was revealed by a whistleblower who is a colleague of Zhang's surnamed Wang.

Wang told The Paper in April that Li and Zhang worked in the same section and obtained their master's degrees successively from Southwest Jiaotong University (SWJTU).

According to SWJTU, the dissertation for a masters of engineering Zhang obtained was regarded as plagiarised as at least 25 per cent of its content could be found in the published work of others.

Read Also
'Inspired by my daughter': Suhaimi Yusof graduates from university at 52 after dropping out thrice 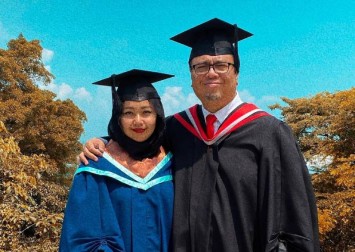 Wang claimed Zhang is not the only fraudulent academic at the university and said plagiarism is rife, but said management turned a blind eye to the problem which prompted Wang to go public.

"Why couldn't we solve this issue via normal channels? Different departments of the college have been shirking their responsibility," Wang said.

Plagiarism has long been a major issue in China, particularly within academic institutions. Nearly all universities and higher education institutions have set specific plagiarism percentage limits and pledged harsh punishment for academic theft, but cases of misconduct have frequently made the news headlines in recent years.

In 2020, Zhang Yuqing was sacked by the university after one of his students publicly accused him of academic fraud. Two of his research papers published in an international journal were also removed earlier this year.

In December last year, the Ministry of Science and Technology revealed 36 cases of academic fraud in the education and medical spheres, with four academics stripped of their doctoral degrees and more than 10 losing their titles as associate professors, chief physicians and deputy chief physicians.