Former president Jiang Zemin had a keen appreciation of science, and “thirst to explore new ideas”.

Former Chinese president Jiang Zemin has been remembered for his lifelong intellectual curiosity and keen appreciation of science. Jiang died last week at the age of 96.

Jiang, who led China’s economic integration through the 1990s and early 2000s as it transformed into a global power, always made time to dig into complex scientific problems and learn from scientists despite his busy schedule, according to some acquaintances.

Rudolph Marcus, a professor of chemistry at the California Institute of Technology, met Jiang during a trip to China as part of a US Nobel laureates delegation in 2000.

“At a dinner in Beidaihe, we were asked to give advice to the government, so I spoke in favour of basic research – and not just applied research,” said Marcus, who received the 1992 Nobel Prize in chemistry for his theoretical work on electron transfer in chemical systems.

Marcus said he gave Jiang “examples of some striking consequences for society of what originally started as basic research projects”.

“And we both talked about our grandchildren… the meeting was delightful,” he said.

In Beijing in 2002, Jiang attended the opening ceremony of the International Congress of Mathematicians (ICM), a global gathering known as the “Olympics for Mathematicians”.

“The original plan was for the president to leave after conferring the Fields Medal to the winner,” recalled Ma Zhiming, a senior mathematician with the Chinese Academy of Sciences, who was part of a team of local organisers for the congress.

But after Ma informed Jiang who would be speaking after the awards ceremony, Jiang decided to stay until the ceremony was over.

“Unlike what one might expect from a politician, he did not rush in to give a speech and rush out again. Rather, he sat and listened for 90 minutes,” according to the January 2003 issue of the Notices of the American Mathematical Society.

During the ICM opening ceremony, Jiang even got up from his seat to adjust a microphone for Shiing-Shen Chern, a distinguished Chinese-American mathematician who was sitting next to him.

“My foreign colleagues told me they were deeply touched by Jiang’s move, which would be unimaginable with leaders from their countries,” Ma said.

Jiang, who trained as an engineer in Nanjing and Shanghai in the 1940s, was also quick to offer help to his classmates as they studied mathematics, science and engineering courses at college.

According to The Man Who Changed China: The Life and Legacy of Jiang Zemin, a biography by Robert Lawrence Kuhn, the future president was known as “Dr Jiang” because of his broad knowledge on a range of subjects.

“His grades are often among the top, and he’s especially good at math. He enjoys debates and often turns out to be the winner – because of all this, we grant him the ‘doctor’ title,” another wrote.

In 1997, while speaking at Harvard University, Jiang shared memories of his first calculus lesson in high school. He said that the teacher quoted ancient philosopher Zhuang Zi as saying “cut away half of a rod and keep on halving what is left, and there will be no end to that process… That gave me a vivid concept of limit,” he told the audience. 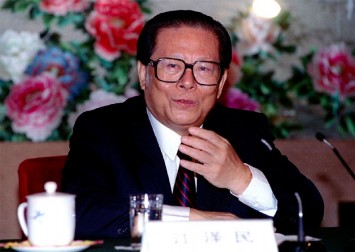 During his 1999 visit to Hou Kong Middle School in Macau, Jiang brought up a famous geometry problem known as Miquel’s Pentagram Theorem, which he failed to solve during his college entrance exam.

“I just wanted to use it as an example to show that we all need to keep an inquiring mind and dig into tough problems,” Jiang said to the students and teachers at the school. The complex theorem is now sometimes referred to as “Jiang Zemin’s problem”.

Jiang also had a passion for theoretical physics, according to the biography. In 1991, Chinese rocket pioneer Qian Xuesen received an unexpected call from Jiang, asking him for an explanation of superstring theory – an attempt to explain all the particles and fundamental forces of nature in one theory.

Late one evening, Jiang placed a phone call to Song Jian, a top-level military scientist and Communist Party official, to ask him to explain the difference between Newton and Einstein’s physics, and how they were related to quantum mechanics.

On another occasion, Jiang asked Song why the world existed in three dimensions. Song ended up visiting Jiang’s office, and the two discussed Riemannian geometry for an hour. “I always enjoy speaking with President Jiang. He has such a thirst to explore new ideas,” Song said.

“The Chinese people have every reason to be proud of their ancient tradition of civilisation,” Jiang said in 2000, during an interview with Science magazine. “But, on the other hand, we should not stop learning – not even for a single day – from all the fine traditions of the world.”