A handout photo. A young girl had large stomach stones removed (right) with the help of drinking cola.

It is not often that somebody can claim a medical emergency was turned around by a can of cola, but this appears to be the case for a four-year-old girl in Shanghai.

Doctors discovered a goose egg-sized stone in her stomach after being admitted to hospital on Feb 15 because she was experiencing abdominal pain and was vomiting blood, according to ThePaper.cn.

It turned out the cause of the stone was six dried persimmons she ate on an empty stomach. The stone was causing numerous erosions in her stomach, leading to bleeding. The girl also had an ulcer that was about 1cm in diametre.

The stone was over 4cm in length and proved too large and hard to dislodge when doctors tried to remove the object with a stone basket, a long thin tool with a metal “net” on the end. The gastronomy staff was concerned that a significant surgery would exacerbate the child’s pain.

After reviewing the results and speaking with the girl’s parents about her medical history and recent diet, Professor Huang Ying, director of the hospital’s gastroenterology department, concluded that the foreign body in her stomach was a large gastric stone caused by overconsuming persimmons.

According to Huang, when tannic acid, a chemical compound in persimmons, comes into contact with stomach acid, it alters the protein in the fruit, transforming it into a stone-like mass. The cluster will harden the longer it stays in the stomach. 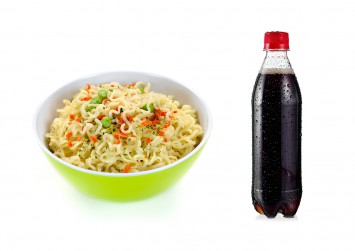 Based on clinical experience, Huang and her colleagues recommended that the girl drink cola every day to soften and dissolve the gastric stone. The team would reanalyse the best time to perform another gastroscopic examination and get the stone out with a stone basket.

The treatment worked. A few days later, a gastroscopy revealed that the stone had shrunk and softened.

The gastroscopy team cut the stone into two pieces and removed them successfully.

Huang said that the cola treatment needs to be used only on a case-by-case basis and that patients should consult their doctors before drinking cola to treat stomach stones.