The Chinese model who appeared in a Dolce & Gabbana advertisement that triggered a major backlash over accusations of racial stereotyping has broken her silence to apologise for her part in the commercial, adding that it had "completely ruined" her career.

Two months after the saga, Zuo Ye, a recent graduate of South China Agricultural University, wrote on the social media network Weibo on Monday that she had not given enough thought to the content of the video and felt "very guilty and ashamed" about the ensuing uproar.

"Personally I would never show any disrespect to my motherland. I love my country and feel proud to be able to represent China on the catwalk," wrote Zuo. "I will draw a lesson from this and show the Chinese in a better light. Again, I apologise to my fellow countrymen."

The three videos featuring Zuo, in a red D&G dress, struggling to use chopsticks to eat pizza, spaghetti and a giant version of a cannoli pastry was designed to promote the Italian fashion powerhouse's campaign "DG Loves China" ahead of a fashion show in Shanghai last November. 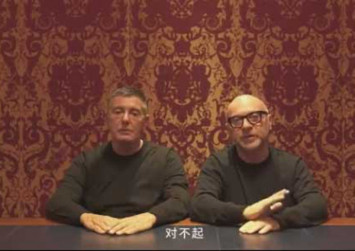 But the campaign backfired after it provoked widespread accusations of racism. The row then snowballed into a major PR crisis for the Italian fashion brand after screenshots of a social media message sent by its co-founder Stefano Gabbana, in which he apparently described China as a "country of s***", were leaked.

The ensuing outcry caused the cancellation of the event, and despite a public apology from Gabbana and his partner Domenico Dolce, the brand was hit with a widespread boycott from celebrities, distributors and the Chinese public.

Zuo also suffered widespread attacks from social media users who accused her of "making money by insulting your own country" and "vilifying the image of the Chinese".

In the statement published on Monday, Zuo said she was not a public figure and had decided to remain quiet when the controversy erupted so as not to provoke further conflict, but now wanted to set the record straight.

She said she had hoped that working with a major international brand would provide a significant career boost, but instead the campaign had "almost completely ruined" it.

She said that she had been told she was going to shoot a "fun video" involving Italian cuisine and that the email briefing her about the job contained few other details about the content.

During the three-hour shoot, Zuo was instructed by the director in English to show surprise, bewilderment and appreciation of the food even though she felt awkward during shooting.

She wrote that she questioned the choice of chopsticks on the set but was told to just follow instructions.

"I couldn't do it in the first try and I asked, 'Are you kidding me? With chopsticks?' The director said 'Yes! I know it's hard. Just try to do that.'"

"I felt awkward when using chopsticks for food that was larger than the normal size. I seldom laugh in my daily life but the shooting required a lot of extravagant acting and I felt very uncomfortable, too," Zuo wrote.

Zuo said, as an ordinary model, she had no right to watch the finished product beforehand or to give any opinion about the content.

Not all social media users were mollified by the apology. "I still think your explanation was useless and your video disgusting. You can only blame yourself for having no distinguishing capability. No point whitewashing your wrongdoing," said one internet user.

But others defended her and said they understood that, as a model, she had no control over the commercial.

"Blame a model? Why not blame the chopsticks while we are at it?" said another.