A Trump statue has caught on with China’s online shopping community.

Months after former US President Donald Trump stepped down from office, his influence still hangs over China’s internet.

The latest trend is a statue of Trump, sitting cross-legged and with his eyes closed in a Zen position, draped in a robe. The description says, “Make Your Company Great Again’’, a wordplay on Trump’s election slogan “Make America Great Again” .

“Does it really work if I place it at home?” one potential buyer asked in a post on one of the shops.

China’s commercial websites have taken advantage of Trump to their profit.

Previously, Taobao has offered an array of products, including toilet paper rolls with Trump’s face printed on them, a toilet brush shaped like Trump’s signature messy orange hair, and T-shirts printed with satirical cartoons of him.

Some shops described the statue as “Dong (know it all) Buddha of the West” and “Jianguo”, both nicknames given to Trump in China over his term.

They have called him the “Dong King”, mocking his claim to have expertise in many areas that often exposed his ignorance.

“Comrade Jianguo” and “undercover agent of the Communist party” are other popular names, with “Jianguo” literally meaning “building the country”.

During Trump’s four-year term, the Chinese public had a love-hate relationship with the former president. On the one hand, they criticised Trump for starting the US-China trade war, for labelling Covid-19 the “Chinese virus” and “kung flu”, yet on the other hand many celebrated his antics and viewed him as a source of immense amusement.

“Trump is an agent sent by China to win the election in 2016 and disrupt the US to make it as messy as possible, so China can distract US suppression against China and win the competition easily,” one comment said. 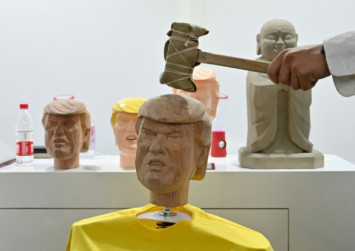 When Trump announced on Twitter that he had caught the coronavirus, ecstatic Chinese on social media made jokes such as: “Is this a National Day gift?”

It has also led to the Trump-Biden debate being watched by millions online in China. After Trump left office, social media users bade him farewell with more mockery.

Other comments expressed disappointment that he would be less of a source of entertainment and were quick to make suggestions to the former president, “Weibo welcomes you, come to Weibo please!”