“The great rejuvenation of the Chinese nation has entered a key phase, and risks and challenges we face are conspicuously increasing,” Xi said, according to state news agency Xinhua.

“It’s unrealistic to always expect easy days and not want to struggle.”

He told an event on Wednesday (Sept 1) to mark the new semester at the Central Party School, where cadres are trained, that: “(We) must not yield an inch on issues of principle, and defend national sovereignty, security and development interests with an unprecedented quality of mind.”

His remarks to hundreds of mid-level cadres from around the country did not elaborate on the need to struggle but were made amid growing tension with the United States on a range of fronts, including geopolitics, the economy and technology.

Beijing has reacted strongly to what it sees as provocations that touch on its core interests, including staging military drills near Taiwan last month in response to US expressions of support for the island. 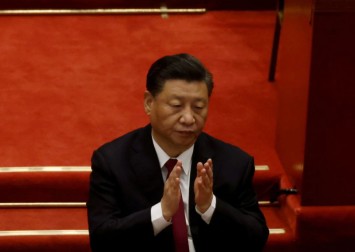 The growing international criticism of Beijing’s policies in Xinjiang, where it is accused of the use of mass detention and forced labour, have seen it exchanging sanctions with Washington, London and Brussels – freezing a trade deal with the European Union that had taken seven years to negotiate.

Senior Chinese officials and generals have signalled they expect the competition with the US to deepen, despite recent visits by senior White House officials such as deputy secretary of state Wendy Sherman and special climate envoy John Kerry.

The party school curtain raiser has been used by Xi in the past to set the tone for training sessions for hundreds of cadres from across the country.

In the past two years, he has called on officials to “struggle” against threats to China’s development.

The tone of his remarks have been consistent with Beijing’s messaging since last year, said Shi Yinhong, an international relations professor with Renmin University in Beijing.

“China’s stance has been tough since the outbreak of Covid in the US last year and the tensions that followed,” he said.

“Standing firm on China’s position in the competition with the US is never only the job of the foreign affairs departments, but something the entire country is mobilised to do,” he said.

Shi added that the same tone is likely to continue for the foreseeable future.

Xi has previously highlighted the need to struggle to ensure China’s rise. At the same event in 2019, he warned that this would continue until the centenary of the founding of the People’s Republic in 2049.

On Wednesday the Chinese leader urged all officials to stand firm on matters of principle, saying: “People who play the nice guy think only of themselves but not the public.”

He added that failing to fight for matters of principle was letting down the people and may even be a crime.

Xi also told the cadres to toe the party line and said they should feel proud to be sent to work in remote parts of the country and tackle problems at the grass roots level.

ALSO READ: China’s coming era of ‘common prosperity’ – and what it means for the rich