The sinking vessel as seen from the air from a rescue helicopter.

Hong Kong rescue teams will search into the night after pulling to safety three members from the 30-strong crew of a vessel that snapped in two during a typhoon, with the status of the remaining 27 still unclear.

The trio told rescuers their fellow crewmates might have been swept away from the stricken, tilted ship, as they could only cling on to railings.

Hong Kong’s Government Flying Service on Saturday afternoon said it would widen the search zone by carrying out two more sorties before nightfall and extend the rescue mission into the night if the weather allowed.

The operation – centred on the mainland China-registered engineering vessel “Fujing001” – was launched with the No 8 typhoon warning signal in force.

The Observatory lowered the typhoon warning to No 3 at 4.20pm. It estimated that the signal would remain in force until 4am on Sunday.

The flying service earlier said it had been alerted to the sinking by the Hong Kong Maritime Rescue Coordination Centre at 7.25am.

A fixed wing aircraft and two rescue helicopters raced to the scene, about 300km southwest of the city, and two more helicopters were also dispatched to the area.

The Nanhai Rescue Bureau under mainland China’s transport ministry sent a vessel to the scene.

The flying service said the initial rescue mission was made more difficult because the ship was near the centre of Typhoon Chaba. Visibility was said to be at 500 metres, with huge waves and strong winds at 144km/h.

“The worst part is that the accident happened at the centre of the cyclone,” the controller of the flying service, Wu Wai-hung, said in a televised interview. “The waves were over 10 metres tall. Due to bad weather, the first helicopter was unable to conduct any rescue.”

Captain Cheung Sai-teng, chairman of the Hong Kong Seamen’s Union, said the accident might have been caused by an uneven distribution of goods on the vessel.

“I suspect goods on the vessel may have been placed unevenly. It was then threatened by the waves and broke into two,” Cheung said in a televised interview.

Amid the unstable weather, the city’s Palace Museum cancelled its highly anticipated opening because of the No 8 signal.

The storm also disrupted air traffic and at least three flights inbound to Hong Kong were diverted to Taiwan.

The government said it had received 45 reports of fallen trees and its 25 temporary shelters were accommodating 88 people. Three people were injured and treated at public hospitals as of 4.30pm, the Hospital Authority said. 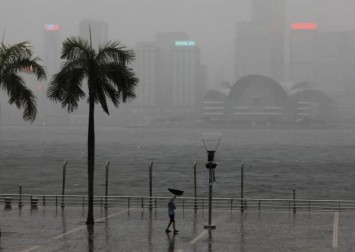 Authorities confirmed one flooding incident but no reports of landslides were received so far.

With the No 3 typhoon signal issued, the MTR has been increasing the frequency of its operations, with trains arriving at five-minute intervals on the most used lines, including the Island, Tsuen Wan and Kwun Tong ones.

Bus operators Citybus and New World First Bus said most routes would gradually resume limited operations from 5pm, while KMB and Long Win Bus would start their services from 5.30pm. Some routes would remain suspended.

Sun Ferry’s Central-Cheung Chau and Central-Mui Wo services will start from 6pm onwards, while inter-islands and inner harbour routes will resume on Sunday.

Typhoon Chaba also affected many attractions in the city, including the Hong Kong Wetland Park and Ngong Ping 360, which suspended its cable car services.

The Palace Museum was forced to reschedule its opening from Saturday to Sunday.

The West Kowloon Cultural District Authority said that operating hours on Sunday would be extended to between 9am and 9pm.

The authority said people who bought Sunday tickets could enter the venue one hour before their specified entry times. Those who purchased Saturday tickets can visit the museum on Sunday at their earlier stated entry time, and those holding morning and afternoon tickets can also choose to visit at 9am and after 4pm respectively.

It added it had also extended the validity of unused tickets by 180 days so visitors can enter the museum on any day during the time printed on the tickets.

But the authority warned that people who opted to visit on Wednesday, which is designated as a free entry day, would not be compensated for ticket costs.

At 7pm, Chaba was estimated to be about 340km west of Hong Kong and was forecast to move northwest at 16km/h towards inland western Guangdong province.

“Chaba has already made landfall near Dianbai district, Maoming City, Guangdong and is departing gradually from Hong Kong. Local winds are weakening gradually,” the Observatory said.

“It is windier over the southwestern part of the territory, occasionally reaching gale force offshore and on high ground. The outer rainbands associated with Chaba will still occasionally bring squally showers to Hong Kong.”

The No 3 signal means winds with average speeds of 41 to 63km/h are expected from the southeast.

The Palace Museum was set to fully open to the public on Saturday, having sold more than 70 per cent of tickets for next month, with a final shipment of national treasures loaned by its counterpart in Beijing.

“We have been working overnight to place the artefacts in our exhibition halls, everything will be placed in display cabinets … and our exhibitions will be ready. We are confident that the Palace Museum is ready to be fully opened on July 2,” museum director Dr Louis Ng Chi-wa said earlier this week.

The Education Bureau also announced that classes for all day schools were suspended while classes of evening schools would resume as No 8 typhoon warning signal was cancelled.

The No 8 signal was raised at 7.10pm on Friday, hours after President Xi Jinping left the city at around 1pm following a two-day trip to swear in the new administration and mark the 25th anniversary of Hong Kong’s return to Chinese rule.

As Chaba made landfall around 3pm, it also brought poor weather to neighbouring Macau, where 50cm of flooding was reported at its Inner harbour, and Guangdong province.

Tornadoes were sighted off the coast of Zhanjiang city and near Jieyang Chaoshan International Airport, while high-speed rail services on Hainan Island were suspended due to strong winds and heavy rain.

The name Chaba in Thai refers to a type of tropical bloom known as a shoe flower, part of the hibiscus family.