Epic fail: Scammer in China throws himself before police car

We've all heard of scammers in China who pretend to be knocked down by vehicles and demand compensation from unwitting drivers.

But one man from Hefei showed that he hadn't mastered the trick as he threw himself before a police car.

Earlier this month, the surveillance camera on a nearby building captured how the incident unfolded.

In the CCTV footage, the man was first seen fiddling with his mobile phone in a car park.

As a police car drove towards him, he threw himself before the vehicle. He even folded his hands behind his head while lying down on the road.

However, luck was not on his side.

The man only realised his folly when a police officer emerged from the car and quickly jumped to his feet.

But it was already too late as several passers-by had already witnessed the 'accident'.

The video clip, which has been viewed over 790,000 times since it was shared on Weibo, garnered many comments.

Many netizens said that the act was a display of blatant disrespect for the police while others suggested that man might be mentally unsound.

And despite his obvious lack of wit, there were some people who commended the man on his boldness.

The fate of the scammer remains unknown. 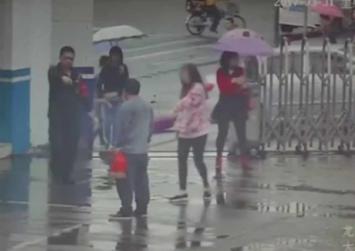 However, he is not the first bumbling criminal who was caught in the act by surveillance cameras.

Another man in Shenzhen was filmed snatching a woman's mobile phone then running straight into a police station.