While residents in Shanghai try a variety of novel ways to buy daily essentials during the city’s coronavirus lockdown, billionaires it seems are no exception.

The city recorded 19,982 Covid-19 cases yesterday , setting a daily record for the sixth day in a row, as the city’s 25 million residents remain under a hard lockdown as authorities struggle to contain the virus and carry out mass testing.

On Thursday a screen capture of a message by Kathy Xu Xin, dubbed as “China’s venture capital queen”, asking for ways to buy bread and milk for her family went viral on social media app WeChat.

The 55-year-old entrepreneur, who was ranked 71 in the World’s Best Venture Capital Investors In 2021 by Forbes, lives in a high-end villa compound in the city’s Pudong District.

“Can any neighbour introduce me to the bread buying group? My family has a lot of people. We need bread and milk. Thank you,” the founder and president of independent private equity firm Capital Today wrote on WeChat.

After a neighbour said she could connect Xu to the group, a woman named Fiona Yu Fang who is also an equity investor asked, “Is that you President Xu?”

Their conversation thread has been flooded with joking comments.

“I had thought only we fund managers were not able to get diapers. I didn’t expect that Sister Xu Xin also needed to join buying groups,” a man called Jackey wrote on WeChat. “Sister Xu, you are the one who has acquired YH Supermarket [a leading mainland supermarket chain].” 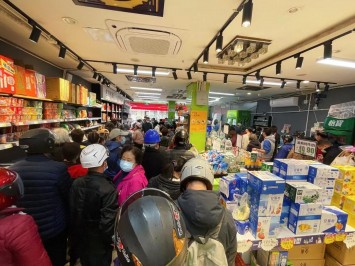 “She has invested in so many ‘new retail’ forms of business, but in the end still has to resort to joint shopping schemes,” wrote one person on Weibo.

“Even billionaires have to scramble for food like the rest of us,” another person said. “Finally there is one problem which can not be solved with money.”

Under lockdown Shanghai residents have taken to forming teams to make joint shopping orders online, as it is extremely difficult to purchase food on apps individually due to high competition and the number of delivery workers shrinking as many have been infected with the virus or placed under locked down in their community.

Xu later explained on WeChat that she felt embarrassed that her request for bread had been widely circulated.

“My son brought his classmates to play in my home. Our house now accommodates 12 people, posing a huge demand for food. So I will also join buying groups,” said Xu. She added that her shortage of bread and milk has since been resolved.