The accused, who were all senior Apple Daily employees, arrive at West Kowloon Court for a pretrial hearing.

Six former Apple Daily executives could be jailed for life if found guilty of breaking the national security law in Hong Kong after prosecutors applied to move the trial to the High Court.

The defendants appeared at West Kowloon Court on Thursday (Oct 1) for a third pretrial hearing over the charge of colluding with foreign forces, three months after the tabloid-style newspaper published its last edition amid a national security law crackdown.

The prosecution did not reveal whether the trial would be heard before a jury. West Kowloon Court will handle the transfer procedure on Oct 12, with the six remaining in custody.

Conspiracy to collude with foreign forces is punishable by life imprisonment, with a minimum jail term of 10 years applicable in serious cases.

But the court heard on Thursday that the law firm representing the three companies in previous proceedings had not received further instructions to act on their behalf.

Prosecutor Andy Lo Tin Wai said police would check whether the companies had knowingly ignored the proceedings. Acting chief magistrate Peter Law Tak Chuen said he would ask the court's first clerk to notify the three companies of the next hearing date. 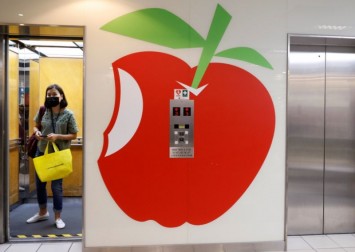 A trial can be conducted in a defendant's absence only in rare and exceptional cases, for instance, where the party has deliberately and voluntarily waived the right to be present and to be legally represented.

Separately, the former vice-chairwoman of the group behind Hong Kong's annual candlelight vigil to commemorate the 1989 Tiananmen Square crackdown lost her bail application for a fourth time on Thursday.

Barrister Chow Hang Tung was charged on Sept 10 with inciting subversion and failing to provide information to national security officers about the Hong Kong Alliance in Support of Patriotic Democratic Movements of China.

Chow renewed her bail bid before Law, but the magistrate found no material change of circumstances that would justify her release. She can reapply on Oct 8.