Patrick Ho wept as he apologised during his sentencing hearing in New York on Monday.

Disgraced former Hong Kong minister Patrick Ho Chi-ping delivered a tearful apology on Monday in a US federal court in New York after he was sentenced to 36 months in jail and fined US$400,000 (S$540,000) over a multimillion-dollar bribery scheme involving top African leaders.

"I tried very hard to transform my despair into something meaningful," Ho told US District Judge Loretta Preska. "I accept full responsibility. I am deeply sorry."

"Please accept this token [of] respect and gratitude," Ho said, head bowed, at the end of his remarks, which included details about the community work he did at New York's Manhattan Correctional Centre, helping other inmates by giving classes in English, resume writing and public speaking.

Ho, who has been held in custody since November 2017, was given credit for the 16 months he has already served so will spend an additional 20 months behind bars. He was given 12 months to pay the fine.

His lawyer Edward Kim said that the defence team was satisfied with the results, and that Ho's term could be reduced to 31 months for good behaviour in prison. He said they had not decided whether to appeal, but was filing an appeals notice to preserve the ability to challenge the ruling.

Ho, 69, could also apply to serve his sentence in Hong Kong, but his legal team said it did not expect to do so. It is rare for such a practice to be allowed: in the past two decades, only three Hongkongers convicted in the US were granted the right to serve the remainder of the sentence in their hometown.

In his remarks to the judge, Ho recalled the painful feeling that he could not be with his wife and 92-year-old mother. "My wife lost her mother and [I] wasn't there to hold her hand," Ho said. "I pray every day that my mom would live a long life so she will see her son coming back." 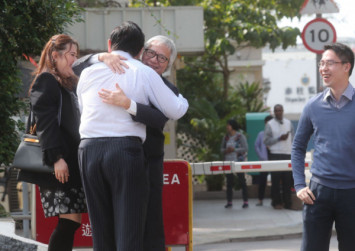 The veteran criminal defence lawyer Robert Precht, who is based in New York and was not involved in the Ho case, said the judge's decision showed more than leniency.

"The sentence is not merely lenient, it is generously lenient," Precht said. "The judge showed him mercy."

Precht also said the prosecution did not go too hard on Ho, choosing not to dispute his contributions throughout his life and focusing primarily his claim that the case was politically motivated.

"The prosecutors were restrained in their comments, which gave the court space to impose a truly merciful sentence," Precht said.

He was arrested at John F Kennedy Airport in New York in November 2017. Last December, a federal jury found him guilty on seven of eight counts of bribery and money laundering over oil rights for CEFC in Chad and Uganda.

Ho remained defiant in the face of the charges. Shortly after his arrest in 2017, he claimed he was being used to "get to the big tiger" and asked a friend to seek help from the Central Committee of China's Communist Party.

After being found guilty, Ho said he was "the first of the sacrificial lambs of such hostility [against China]".

Apart from China's strategic expansion through private companies such as CEFC into Africa, the case also raised eyebrows over UN governance, with three officials linked.

eremic said in court that after his UN term, he received funding from CEFC to set up a think tank.

As for Ho, the conviction could mean the revocation of Hong Kong civic honours awarded by the previous administration. These include the Justice of Peace award in 1999 and the Golden Bauhinia Star in 2007, the second-highest medal handed out by the government.

According to practice, if a recipient is convicted of a crime and faces a jail term of more than a year, the chief executive can rescind the award.

The government's Protocol Division would not comment on the specific case.