Hollywood star Nicole Kidman has not returned to Hong Kong to continue filming a television drama, the Post has learned, contrary to local news reports that sparked fresh debate over the government's policy for Covid-19 quarantine exemptions.

Several Chinese-language media outlets reported Kidman was seen on Fa Yuen Street in Mong Kok on Tuesday (Oct 12), where part of the Amazon Studios series Expats was being shot.

The Oscar-winning actress arrived in Hong Kong in August for a brief stay to begin shooting the drama and received special dispensation to skip the mandatory isolation period.

A health regulation grants exemptions to certain groups of people, such as business executives and diplomats, subject to the approval of the city's No 2 official. Kidman was back in the United States by early September, according to her publicist.

A government source said on Thursday the actress had not returned to the city, and several stall owners in the area said they had not seen her during the filming.

"They were mainly doing location shooting with extras along the market," one owner said. "I didn't see Kidman at all on Tuesday."

Another owner also expressed surprise over the reports of the star being on set, saying: "I only saw the crew here, not Kidman."

The Commerce and Economic Development Bureau, which granted the exemption in August, told the Post on Thursday that overseas film personnel were only granted the privilege "for single entry on a specified date subject to a preapproved itinerary and conditions".

According to a government source, the bureau had not received any request for an exemption for Kidman.

But after stories about her return began circulating, residents took to social media to criticise what they said was special treatment for a celebrity.

"The problem is with the [government]. Stop the double standard. It's like they are both judge and jury here," one user said in a private Facebook group dedicated to discussing the city's quarantine policies.

Another user said: "Many, many people do care about the unfairness and inconsistencies of those that get to come in with no quarantine and those that have to do 21 days."

When Kidman flew in from Sydney on Aug 12, Hong Kong considered Australia a low-risk Covid-19 country, meaning fully vaccinated arrivals who tested negative must undergo a week of compulsory quarantine in a designated hotel. Australia has since been listed as a medium-risk country, requiring arrivals to undergo two weeks of hotel quarantine.

But after Kidman was photographed shopping in Central with her bodyguard not long after landing, residents questioned why a Hollywood A-lister enjoyed preferential treatment when they had to follow one of the most restrictive pandemic-control regimes in the world.

Defending its decision, the government said the actress was given permission to carry out "designated professional work … conducive to maintaining the necessary operation and development of Hong Kong's economy". 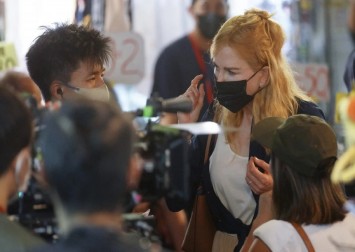 That dispensation came with the conditions that she take at least three Covid-19 tests in the first two weeks of her stay, submit an itinerary of her job activities, travel only point-to-point and stay off public transport.

Kidman's publicist said last month the star had returned to the United States following her filming work in the city.

The government also defended its quarantine arrangement earlier this week after the Post reported Hong Kong's men's rugby sevens team was granted a quarantine exemption upon arrival from a tournament in Canada last month.

Head coach Paul John said the team was granted exemption for four of their 14 days' quarantine and they trained in the early mornings in King's Park Sports Ground, Ho Man Tin, with facilities cleaned after use.

The city's No 2 official, Chief Secretary John Lee Ka Chiu, deemed the quarantine exemption to be in the public's interest.