Families of some of the 39 people killed in a ferry collision on National Day eight years ago in Hong Kong have accused the government of denying them justice and police of dragging their heels over an investigation into the disaster.

With an inquiry by the force ongoing, inquest proceedings cannot begin or death certificates issued.

In an open letter released on Wednesday, the relatives of 17 victims said the government had yet to fulfil its promise to release a full internal report into the crash, which would cover possible mismanagement and negligence on the part of Marine Department officers.

“The ferry disaster has not only destroyed 39 families, it has also left an indelible scar on the hearts of the survivors and cast a shadow over their memories for the rest of their lives,” the letter said.

Eight children and 31 adults perished after the HK Electric Lamma IV ferry, which was taking 124 passengers to view a National Day fireworks display, collided with the Hong Kong and Kowloon Ferry’s Sea Smooth off Lamma Island on Oct1, 2012.

A total of 92 passengers on both boats were also injured. It was the city’s worst maritime disaster in 40 years.

The letter said the then secretary for transport and housing, Anthony Cheung Bing-leung, had promised the internal report would be fully disclosed. The families questioned why parts of it still remained secret.

“For the victims’ families, they can’t get over their pain as they have been denied justice for eight years,” it said. “Some elderly family members also passed away with regrets and indignation.”

The report was completed in 2014 but only partly disclosed to the families under a confidentiality agreement. They were told there was insufficient evidence to charge 17 department officials implicated.

The Transport and Housing Bureau passed the report to police for possible criminal investigations.

“To date, the Coroner’s Court still cannot conduct an inquest into their deaths because the police still haven’t finished their investigation,” the letter said. “In other words, there is not yet any death certificate issued for these 39 victims. Without the death certificates, there are a lot of things that the victims’ families can’t do.” 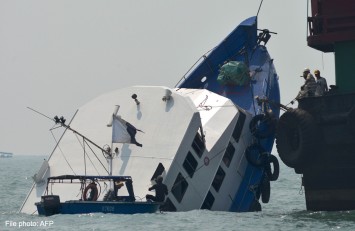 A police spokeswoman said the force had submitted a report into the deaths of the victims to the Coroner’s Court and they were now waiting for further instructions. “The police are still following up on the incident,” she said.

In response to an inquiry by the Post, the Transport and Housing Bureau said that under the law, they could not disclose the full internal report to the public as doing so might contravene the privacy rights of certain individuals. But it noted an executive summary of the findings had been released.

A government-appointed commission of inquiry found in 2013 that “serious systemic failings” in the Marine Department contributed to the tragedy, pointing to a “litany of errors” at every stage of the design, construction and inspection of the Lamma IV, which contributed to its rapid sinking.

The commission cited several factors for the high death toll. Seats on the upper deck of the Lamma IV were loosely attached and came off during the collision, throwing passengers towards the stern. Passengers also had trouble getting to life jackets and fastening them, while no child-sized life jackets were available.