Shu Tao, a rescue dog trainer, leads his dog named Sai Hu, 7, in a search for missing villagers after landslides in Huangmei county in Hubei province, on July 8. A handout photo.

Pictures of the rescue dogs were liked by many netizens after they were published online by onlookers.

All the dogs were awarded a weeklong holiday, said Li Shenjun, director of the rescue dog training center of the Wuhan branch of Hubei Fire Protection.

According to Li, it would be the last rescue mission for two of the dogs － Tu Tu and Wei Ni － both of which are older than nine and a half years.

The other three dogs are about seven years old.

"Tu Tu － one of the first dogs on the search and rescue dog team in Hubei province － and Wei Ni are set to retire because of their old ages," Li said.

The landslide occurred in Yuanshan village in Dahe township after continuous heavy downpours.

Read Also
Cuddle without risk at this movie theatre in Changsha 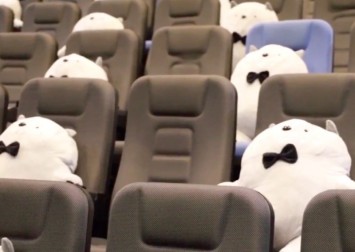 More than 30,000 cubic meters of mud and earth buried seven houses in the village at 4am on July 8, and more than 120 rescuers and the five rescue dogs were sent from Wuhan, capital of Hubei, and Huangshi city to help search for the nine villagers who had been reported missing.

"With the help of the rescue dogs, all nine missing villagers were finally found," Li said.

Firefighters had to use water to help clean the dogs' noses every 10 to 20 minutes after the dogs had difficulties smelling due to the mud blocking their noses during the rescue work, Li said.

An 81-year-old woman who was buried by the debris is now in stable condition after she was rescued and sent to hospital.

According to Li, only a few fire protection departments on the mainland have fire search and rescue dogs.

Besides Hubei, Yunnan and Shandong provinces also have fire rescue dogs, he said.