Those killed among dozens who have died as rains wallop southern region.

The death toll from a rainstorm in Mianning county in Liangshan Yi autonomous prefecture in Sichuan province rose to 12 on Monday, with 10 people reported missing, the county government information office said.

The rainstorm started at 6 pm on Friday and continued until 1 am on Saturday, causing floods and wreaking havoc in many villages.

The vehicle was overturned by the flood. He and his mother survived, and his 11-year-old daughter was rescued by a neighbour after she clung to a cherry tree in the neighbour's courtyard. But the other five family members were swept away by the water, said Lu Zheng, Party chief of Yihai. 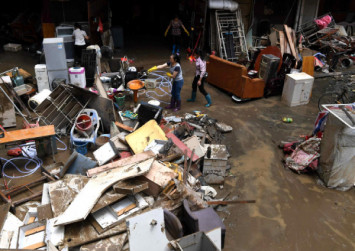 Caogu village in Yihai was one of the areas hardest hit by the flood, which washed out road sections, collapsed houses, cut telecommunication signals and destroyed crops.

Search and rescue personnel paid a house call to each of the more than 600 families in the village.

More than 3,000 people from those families will be relocated to three centralised resettlement sites, Lu said.

Floods in southern China have affected more than 12 million people, with 78 people killed or missing and 729,000 evacuated, as well as more than 8,000 houses toppled and 97,000 houses damaged since the beginning of this month, with direct economic losses of nearly 26 billion yuan (S$5 billion), according to the Ministry of Emergency Management.

China's National Meteorological Centre on Monday issued a blue alert for rainstorms as heavy downpours continue to inundate vast stretches of the country.

Some of these regions will see up to 7 centimetres of hourly precipitation accompanied by thunderstorms and strong winds, the centre said.

China has a four-tier color-coded weather warning system, with red representing the most severe, followed by orange, yellow and blue. 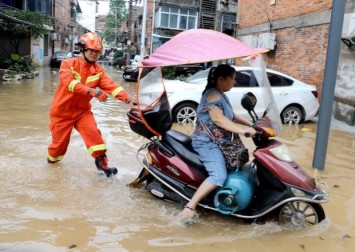 On Saturday and Sunday, Hubei witnessed its largest rainfall this year, and water swelled in its rivers, according to the Hubei provincial government information office.

As part of the aftermath of the rainstorm-induced floods, the Mulan Great Lake, a famous 5-A level scenic area in Wuhan, was closed on Sunday and Monday

Wuhan, which lies on the Yangtze, was hit by the country's last major floods in 1998, which killed more than 3,000 people and left 14 million displaced.