The victim was taken to Queen Elizabeth Hospital in Yau Ma Tei.

Police have stepped up surveillance of a notorious triad in Hong Kong amid fears of revenge attacks after a former gangland boss was assaulted in a brutal knife attack.

The 55-year-old victim, believed to be a former leader of the Wo On Lok triad, was in a critical condition in hospital on Thursday, after he was set upon by three men in Kowloon Bay.

Known as “Fei Kai” in the criminal underworld, the former gangster tried to escape when ambushed at the junction of Wang Hoi Road and Lam Lee Street in the early hours of Wednesday.

Despite trying to run, he was caught by one of the attackers, fell to the ground, and then slashed repeatedly by his assailants.

Police said the three attackers, wearing caps and surgical masks, fled in a car driven by a fourth suspect before officers arrived. No arrests were made.

The victim suffered deep cuts to his four limbs, and was taken to Queen Elizabeth Hospital in Yau Ma Tei for treatment.

In May of 2012, Fei Kai was also injured in a knife attack in Cheung Sha Wan that resulted in a traffic policeman shooting dead one of five attackers. 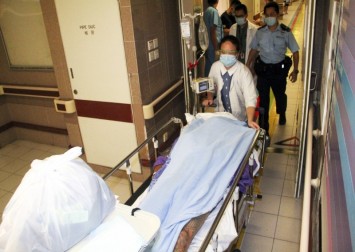 The incident was sparked by long-standing infighting between two factions in a leadership struggle in Wo On Lok. Fei Kai was later elected as the leader of the triad society.

A police source said intelligence suggested the gangland boss stepped down as leader several years ago, but remained as a senior member in the triad, and his followers were still active in the area.

He said anti-triad officers were investigating what had sparked the latest attack, adding that police from different regions had intensified their watch over the gang to prevent revenge attacks.

Wo On Lok, also known as Shui Fong, is one of the city’s active triads and was founded by a group of workers in a soft drink factory in Sham Shui Po more than 70 years ago.

In the first six months of this year, police handled 810 reports of triad-related crimes across the city, up 8.3 per cent from 748 cases in the same period last year.