A former senior executive of the media group founded by jailed Hong Kong tycoon Jimmy Lai Chee Ying has agreed to help prosecutors secure the mogul’s conviction in a fraud trial in exchange for his own personal freedom.

Next Digital’s then chief financial officer and chief operating officer Royston Chow Tat Kuen turned against his former boss and colleague in the witness box on Monday (May 16) after prosecutors let him off the hook on the condition that he assist in the pair’s prosecution.

Chow, 64, initially faced a joint charge of fraud alongside Lai, 74, and Next Digital’s former chief administrative officer Wong Wai Keung 60, when the trio first appeared in court in Dec 2020.

Lai is currently serving a 20-month jail sentence for his roles in four unauthorised assemblies, three of which stemmed from the 2019 social unrest.

Before the District Court trial opened earlier this month, prosecutors applied to handle Chow’s case separately without giving an explanation in open court, while slapping an extra count of the same offence against the media mogul.

Director of Public Prosecutions Maggie Yang Mei Kei on Monday submitted a certificate to the court stating her team would exempt Chow from criminal liability if he offered “detailed and truthful” evidence on the stand.

While fraud is not a crime under the Beijing-imposed national security law, prosecutors have asked that their complaint be heard by an arbiter hand-picked by Chief Executive Carrie Lam Cheng Yuet Ngor for national security cases, who they said could better foresee any potential challenges to the prosecution’s case.

Lai and Wong allegedly concealed the operation of a consultancy firm at Apple Daily’s headquarters for more than two decades in breach of its land lease conditions.

The move was said to have enabled the now-defunct publication to earn at least HK$1.09 million (S$193,000) in rent from Dico Consultants, a company controlled by Lai, and allowed the latter to evade land premiums of up to HK$110 million.

Chow, who entered the court via a special passage designated for protected witnesses, did not have any visible interaction with either defendant sitting on the opposite side of the room.

Formerly a director and shareholder of Dico, Chow said its employees had indeed worked under the same roof as Apple Daily staff in Tseung Kwan O Industrial Estate since April 1998, despite the Hong Kong Science and Technology Parks Corporation banning the use of office space other than for publication purposes.

The former Next Digital executive acknowledged the group had never listed Dico’s name on the floor directory at Apple Daily headquarters, but said he did not know why.

“I did not handle matters relating to the directory, so I don’t know whether colleagues omitted it or decided not to show it knowing that [Dico’s operation on the premises] was not allowed,” he said with a sigh.

Chow said he had no idea why Lai and Next Digital never applied to the corporation for an operation licence so that Dico could conduct its businesses above board.

The court heard that apart from making investments through its subsidiaries, Dico had covered the expenses of maintaining certain private cars and yachts, holding and renewing the tenancy of Lai’s mansion on Kadoorie Avenue, as well as paying the salary of chauffeurs, yacht captains and domestic helpers working there. 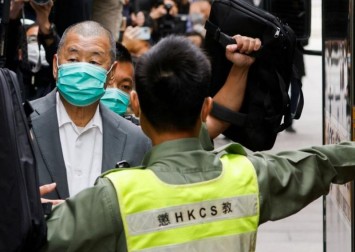 Wong was involved in all aspects of Dico’s administration for more than a decade, from repairing the cars and yachts to fixing Wi-fi connection issues at Lai’s house. Chow, meanwhile, was responsible for managing personnel and authorising pay cheques.

While Lai held no administrative position in Dico, Chow said his former boss, being the sole beneficiary of the company’s earnings, had the final say on the mode and venue of its operation.

In response to the prosecutor’s query about Dico’s “ultimate decision-maker”, Chow said: “Mr Lai was the highest person in command.”

Fraud is punishable by up to seven years in jail when the case is heard at the District Court.