Zhao Zhengyong was given a two-year suspended death sentence, after which his term could be reduced to life in prison.

Zhao Zhengyong, former Party chief of Shaanxi province, was sentenced to death with a two-year reprieve by a court in Tianjin on Friday for taking bribes of more than 717 million yuan ($141 million).

The Tianjin No 1 Intermediate People's Court said in a ruling that Zhao cannot be given a commutation or released on parole, even if his suspended death penalty is reduced to a life sentence, and he has to spend the rest of his life in prison.

Zhao was deprived of political rights for life and all his properties were confiscated, it said.

After hearing the ruling, Zhao said he agreed with the conviction and accepted the sentence, adding he will not appeal to a higher court.

According to the ruling, from 2003 to 2018, Zhao made use of his positions, including secretary of the Communist Party of China Shaanxi Provincial Committee and governor of the provincial government, to help individuals and departments profit in construction, enterprise operation, job promotion and work transfers, and then accepted bribes in return.

The court said Zhao's behavior constituted the crime of bribery and he should be sentenced to death for his particularly large amount of bribes, bad influence on society and extremely big losses to the country.

"Given that he confessed to all his offenses and all the illicit gains have been seized or frozen, we decided to give him a suspended death sentence as a lenient punishment," it said.

"But considering the facts and circumstances of his crime, he will neither be commuted nor released on parole after his sentence is reduced to life imprisonment," it added.

Under the Chinese Criminal Law, people given a suspended death sentence will not be executed immediately. T

They will face a life sentence if they do not reoffend during the two-year probation, and the prison term of those having rendered meritorious services during the period can also be cut to 25 years.

The law allows them to obtain a further reduction in their sentence if they continue performing well in prison, stating they can be released on parole after they serve 15 years of imprisonment.

Xu Hao, a criminal lawyer from Beijing, said Zhao's suspended death sentence shows the country's strong determination and intensified strength against corruption, adding "the refusal of commutation and parole has not been often given to corrupt officials in recent years". 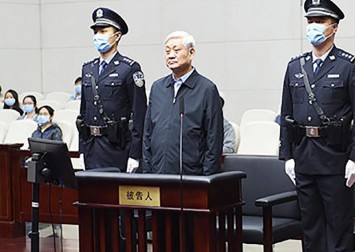 "Life imprisonment without commutation or parole was added when the Criminal Law was revised and adopted in 2015, and it is mainly applied to defendants with serious corruption," he explained. "The change was also to strengthen punishments to fight graft-related crimes."

If he has no serious disease, Zhao will spend the rest of his life in prison, he added.

Zhao, 69, a native of Anhui province, began his career in 1968 and joined the Communist Party of China in 1973. He was appointed governor of Shaanxi in January 2011 and became the Party secretary in December 2012.

In March 2016, he was relieved from the office and came to work in the National People's Congress, the country's top legislature.

In January 2019, he was investigated by the nation's top anti-graft watchdog for suspected serious violations of disciplinary rules and laws.