The model in the incident Li Jingwen.

Some people slammed the advertisement for "defaming the Chinese", while others held the photos were authentic and advised the public should be open to different beauty standards.

The debate largely stems from different beauty standards between the East and West. Here are five of the main points of contention.

We should stress these are general descriptions, not universally applicable.

In East Asia, freckles might be considered a "lethal weakness" for celebrities, especially actors or singers. Although normal people don't care that much, subconsciously they might prefer a "clean" face.

Generally speaking, freckles are more likely to appear if people are out in the sun frequently, and most East Asian women avoid the sun as best they can.

Having freckles, on the contrary, is a trademark for unconventional beauty in the Western world, and some call freckles "angel kisses".

For most westerners, having freckles is no longer just something you have to live with; instead, it is something to be desired. After all, not everyone is lucky enough to have freckles.

When it comes to ocular shapes, it seems Western and Chinese beauty standards don't see eye-to-eye.

Many Chinese think girls with big eyes are the most beautiful. If their eyes have a double-fold eyelid, that is considered perfect.

However, most foreigners seem to prefer Chinese girls with slanted and narrow eyes and eyebrows. Chinese renowned model Lyv Yan is often considered the country's most beautiful by foreigners, while quite a few Chinese people think her appearance doesn't fit with traditional beauty standards.

There is an old Chinese saying that goes "yi bai zhe san chou", which translates as "A white complexion is powerful enough to hide seven faults."

White skin is a long-lived determinant of beauty in China, and dates back to time long past, as can be seen in ancient Chinese paintings and literature.

In the past, women with white skin were often raised in a wealthy and powerful families and easily won favour from their loved ones.

This trend is in sharp contrast to the other side of the world, as Western compulsions drift toward tanning. In their eyes, tanned, copper skin is the symbol of a healthy and vibrant lifestyle.

Boasting a slender figure is something that most Chinese women want, as weight and body figure are an integral part of Chinese beauty standards.

Lots of women strictly control their diet in order to lose weight and keep themselves in the best shape. However, an extremely skinny figure is not the ideal type as most people think they represent an unhealthy state.

Zhao Liying from China, Aragaki Yui from Japan and Lim Yoon-A from South Korea enjoy high popularity in Asia, as they boast bright faces with warm smiles, which win them lots of male fans. 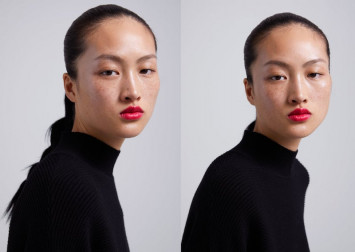 Unlike Chinese girls, Western girls think a more mature look shows independence and uniqueness. The superhero Wonder Woman is an ideal type for most.

As ties continue to grow between China and the West, it is inevitable that these beauty standards evolve. But one thing's for sure - no matter how you look, you are who you are, and that should be satisfaction enough.