Mainland Chinese are embracing value-added funeral services, such as virtual graves, as a pursuit of better lifestyles extends beyond the grave, despite a downturn in the economy, according to Fu Shou Yuan International, the country's largest funeral services provider.

The company is creating demand for innovative methods for consumers to commemorate their loved ones, such as virtual graves where people can store large amounts of information about the deceased. Yuan Zhenyu, the company's chief financial officer, said it had plans to launch virtual services but did not give details.

"There is increasing demand for spiritual services like anniversaries, so in the future we will also help customers make mini films about their loved ones' lives, or digital photo albums," said Yi Hua, the company's chief branding officer. "Our business is going to transition into something like a memory factory," said Yi.

The company unveiled its plans as it announced a 17 per cent increase in net profit to 488.4 million yuan (S$98 million) for 2018 on Monday. Its revenue was up 11.8 per cent to 1.6 billion yuan, missing a Bloomberg analysts' consensus estimate of 1.9 billion yuan. Its earnings per share were 22.2 fen. 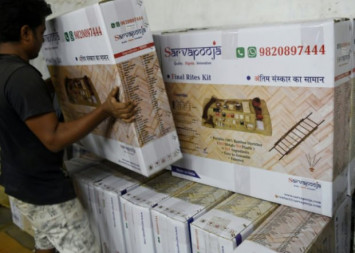 Its sales of "pre-need" funeral services - sold to people preparing for their own deaths - increased by 111.7 per cent since their launch in 2017. The package includes cremation, disposal of ashes and logistical work.

"China's middle-class' spending ability is undeniable, and it is bringing spring to the funeral industry," said Bai Xiaojiang, the company's chairman. While it seemed like unit prices of cemetery services were increasing yearly, Bai said the higher prices were actually due to new "post funeral" services.

More than 9 million people died in China last year, according to the country's National Bureau of Statistics, and its ageing population has fuelled a boom in the funeral services industry.

Grave prices have soared higher than property prices over the past three years, leading Beijing to step in with new regulations, mainly limiting the sizes of columbarium niches where ashes of the dead are stored.

Fu Shou Yuan is, however, not worried about running out of space as it plans to introduce virtual graves, where people can scan a QR code to access information. "Graves in the future will take up less physical space, but will be able to store so much more memory in the virtual space," said director Wang Jisheng.

The company currently operates in 30 cities in 15 provinces, including Shanghai and Hefei in Anhui Province.

Its shares fell 23.8 per cent in Hong Kong in September 2018, when China announced draft rules to regulate the industry, but have since recovered. Its stock closed at HK$6.86 (S$1.18) a share on Monday.