Cheerful family members wave a banner outside an exam venue celebrating that their daughter now has time to ‘fall in love after completing the gaokao.

A family in China has raised eyebrows by marking the end of their daughter’s university entrance exam by holding a huge banner and colourful celebration outside the test centre declaring that she can finally “fall in love”.

On Wednesday, the last day of the gaokao, China’s one-size-fits-all university entrance examination, the family was seen standing in front of a gaokao test site in Mangshi, in southwestern China’s Yunnan province, to celebrate their daughter, Huang Luyao, finishing her exams.

In a video of the spectacle, two unidentified male relatives are seen playing the Xiao Cha, a small Chinese cymbal, and a drum, while another two relatives hold a big banner with the words: “Warm celebration of Huang finishing her gaokao, she can finally start a relationship now!”

“It doesn’t matter if you get good or bad grades because we love you anyway,” one of the male relatives tells Huang in the video.

Huang, who appeared shy when confronted with the spectacle, also laughed and waved with hand gestures to her family before getting a big hug from her grandmother.

The gaokao, which is regarded as one of the most important tests in a person’s life in mainland China, requires students to prepare for years, with most schools prohibiting students from having relationships, which are seen as a distraction from study, among many other rules. 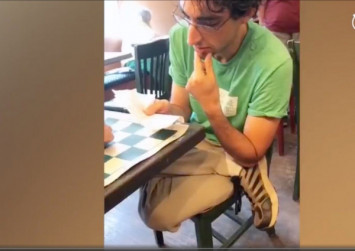 Huang’s family celebration was not the only one to catch people’s attention as the exam period ended. One family in Xian in China’s northwestern Shaanxi province, also congratulated their daughter, Deng Ziling, with a large banner reading: “Congratulations on your escape from the abyss of suffering! Attend a good college and have a good relationship!”

“Because she had been under a lot of pressure for the gaokao, we wanted her to be in a good mood when she came out,” Deng’s aunt explained.

“I wanted her to get into her dream university and find a good boyfriend,” Deng’s father said in a local media interview.

Deng said she was touched by her family’s happiness for her but also said: “I still feel very embarrassed in front of my peers”.

Many people commented what the two families did was so similar to the storyline of Smiling Pasta , a Taiwanese romantic-comedy drama.

“What two sweet families!” said another. “Whoever they are, the men who marry the girls win big!”