A vindictive groom decided to take revenge on his cheating bride - by playing a video of her and her alleged lover checking into a hotel room in front of guests during a banquet.

Miss Zhuo, 42, a private investigator from AJAX Investigations & Security Services, was hired by the groom, a wealthy businessman, to expose his wife-to-be's infidelity just barely a month before the two's wedding banquet.

It was simply a precautionary move.

Much to his surprise, Miss Zhuo returned with evidence of the bride's affair a week later, reports Lianhe Wanbao via Lianhe Zaobao.

Said Miss Zhuo: "She checked into a hotel room with a man, and they left separately after that.

"However, both of them came out from the same room."

Miss Zhuo handed the footage to the groom and thought that the wedding would be called off.

However, not only did the groom continued with the wedding, he even invited Miss Zhuo to his banquet.

She said: "The groom was playing this wedding collage video when suddenly it switched to the footage that my colleague and I had captured during our stakeout.

"He (the groom) was deliberately humiliating the bride.

"She quickly left the banquet and the whole event was called off."

According to Miss Zhuo, such cases make up 70 per cent of the jobs she receives.

The private investigators would usually follow their targets and observe if they were acting suspiciously.

If there was evidence of cheating, the investigators would take a video as evidence and hand it over to their clients. 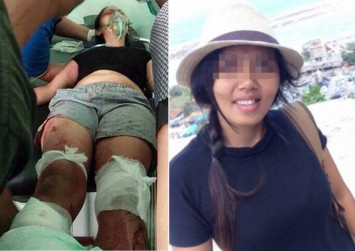