Newly built mobile laboratories for nucleic acid testing in a gymnasium in Guangzhou.

The southern Chinese city of Guangzhou is planning to build a massive quarantine complex for international travellers and local residents from high-risk areas because local hotels cannot cope with highly transmissible Covid-19 mutations such as the Delta variant, according to leading respiratory expert Zhong Nanshan.

"There will be 5,000 isolated spaces and the people there will be isolated according to strict rules to make sure they do not infect each other," Zhong told a group interview on Friday.

Zhong said that after observing the transmissibility of the Delta variant in Guangdong province during the past month, he was convinced that using hotels as quarantine facilities would not be enough to stop the spread of the disease given it was a lot more transmissible than other pre-existing variants.

The mutations of the coronavirus also mean that other transmissible variants may also emerge in future.

"In the long term, Guangzhou and Shenzhen must build these kinds of facilities. Otherwise when there are lots of cases in the future and we have to quarantine them in hotels, it will affect the economy and we cannot isolate them in a real sense."

Zhong said the new facility would cover 250,000 square metres, or 25 hectares — about the size of 46 football pitches.

Guangdong had also been asked to prevent the Delta variant from spreading to other provinces during the recent outbreak by reducing the number of travellers, Zhong said. People travelling from several cities in Guangdong have been asked to produce negative test results before they were allowed to leave.

Zhong, who also played a leading role in tackling the severe acute respiratory disease outbreak in 2003, said so far no local cases of the Delta variant had been found outside Guangdong, but it was hard to guarantee there would be no cases outside the province because of the transmissibility of the variant. 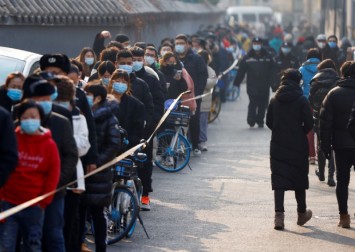 Zhong said the definition of "close contacts" and how they should be isolated should be revised.

China has pursued a zero-tolerance strategy towards tracking and testing all close contacts of a positive case. Expanding the definition means the number of people being tested and quarantined would be increased after a positive case is found.

"In the past, close contacts were defined as the families of a patient, or people who had meals or meetings with the patient in an office or within one metre in the two days before the symptom onset," Zhong said.

"But with the Delta variant, close contacts should be defined as those who stayed in the same space, same unit, or even in the same building in the four days before the onset of symptoms."

China should also consider overhauling its fever clinics to allow enough room for isolation to prevent the spread of highly transmissible variants, he added.

"The concept of close contacts has to be changed because the viral load of people carrying the Delta variant is very high, the breath of a person carries a much higher viral load, " he said.

But he said China should also accept sporadic cases as long as they could be controlled quickly because zero cases were not possible.

China has been effective in tracking all close contacts by monitoring telephone signals and using surveillance cameras in the streets, he added.

Zhong said he was also concerned about the longer period of time it took for a positive carrier to turn negative.

Compared to earlier strains where it took seven to nine days, the average time for a Delta variant carrier to turn negative is 13 to 15 days, meaning the chance of transmission is even higher.

He said according to modelling by the Guangzhou Centre for Disease Control and scientists, if no effective measures were taken, the cases in Guangzhou could reach 7.3 million in 20 to 30 days. They predicted that the number of infections could be reduced to 171 with the stringent measures they had taken and it was close to the real world figure.

Zhong said there were 13 severe and critical local cases and two imported severe cases as a result of the recent outbreak. They were all in stable condition now.

He also said Chinese scientists are also closely monitoring if there are any cases where humans have passed the virus on to animals such as dogs, cats, or rats, which then passed it on to humans again.