Three workers at a Gucci outlet in Hong Kong have fallen ill with measles in the past week, according to health officials.

The outbreak of the highly infectious disease at the luxury fashion shop in the Harbour City shopping centre in Tsim Sha Tsui caused the store to close early on Monday, while the mall's management deployed cleaners for disinfection.

The growing number of cases recorded in Hong Kong this year has put local health authorities on high alert.

The first Gucci worker affected, a 30-year-old salesman, came down with a fever last Tuesday when he flew to Tokyo on HK Express flight UO848. He developed a rash three days later. 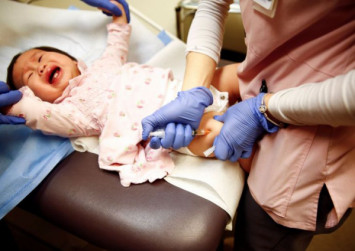 The man returned to the city on the budget airline's flight UO33 on Saturday and attended the emergency unit at Kwong Wah Hospital in Yau Ma Tei. The patient was admitted to Princess Margaret Hospital in Kwai Chung the following day.

His respiratory specimen tested positive for the measles virus. The man, who had previously received the measles vaccine and had a good health record, was listed in stable condition, the Centre for Health Protection said on Monday night.

An investigation showed he had not been overseas during the incubation period, which lasts from seven to 21 days before the onset of symptoms.

The second case involved a 25-year-old saleswoman. She developed a fever and rash on Saturday. She also sought treatment at Kwong Wah Hospital before being admitted to Tuen Mun Hospital on Monday.

The woman, who had also been vaccinated, had no travel history during the incubation period but had been to Shenzhen during the communicable period.

The third employee, another 25-year-old saleswoman, developed symptoms from Wednesday. She was admitted to Tseung Kwan O Hospital on Saturday and her condition was stable.

She had been to Macau during the incubation period.

The three patients, all locals, brought the number of measles cases in the city this year to 73 including 29 associated with an outbreak among workers at the city's international airport. The number of cases last year was 15.

A centre spokesman said the three did not have contact with measles patients during the incubation period. Their home contacts remained asymptomatic. None had worked at other Gucci shops.

Health authorities gave a measles "mop-up" vaccination to 96 of the about 190 workers in the shop on Monday and would continue the operation on Tuesday.

A Harbour City spokeswoman said the Gucci store told the mall about the infections on Monday evening. The store in the Canton Road mall and Gucci's office in the nearby Ocean Centre had been closed since Monday afternoon.

On Monday night, cleaners in surgical masks were seen working inside the closed store.

"We are carrying out a thorough disinfection and extra cleaning throughout the mall. The two washrooms near the store have also been temporarily suspended for disinfection and cleaning," the spokeswoman added.