A Taiwanese man was still grieving the death of his Hong Kong fiancee when he was thrown into another predicament that has made the pain of his loss even worse.

Last Friday (July 14), Sam Man, a resident of Yuen Long district in Hong Kong, lost his smartphone which contained pictures and videos of their time together.

Of particular significance was a video of his marriage proposal to her, he said in an online appeal for the whereabouts of the phone.

After futile attempts in hunting for his phone, Man then went on Facebook on Monday (July 17) to offer a HK$1,000 (S$175) reward for the lost black Samsung Galaxy Grand.

Yesterday, he upped the amount to HK$2,880, and added a plea that the device contained "valuable footage" of his fiancee before she died of cancer. It is not known when he proposed to her and when she died.

His post was picked up by netizens in community pages for Yuen Long residents and received hundreds of shares from sympathisers eager to help him.

Revealing more about his relationship with his fiancee named Fiona, he told HK01 news site that he first met her when both were doing voluntary work to help the poor in Kaohsiung, Taiwan.

"We started dating soon and wanted to get married one day. But she got brain cancer about two years ago. I left my job in Taiwan and moved to Hong Kong to look after her. During that period when I proposed to her, she was already diagnosed (with cancer which) was in its early stages. We had plans to build a life together after her recovery," he said.

Man proposed to Fiona in a restaurant and had the exciting moment captured on his phone by a diner at a nearby table.

As fate would have it, cancer took away her life not long after that.

Said the heartbroken man: "It is not just the video of the proposal - I have got pictures of the hikes we went together,  pictures of our volunteer work, and other treasured photos and videos of our time spent together. Not backing up the files is my fault, but I really hope I can get the phone back." 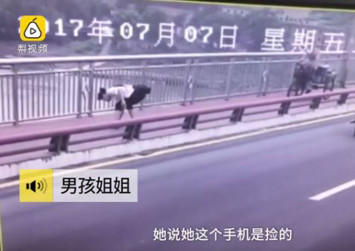