The university is yet to respond to the shocking revelations, even as food safety remains a serious concern on campuses in China.

Students at a university in Shenzhen, Guangdong, southern China, blew the whistle by posting evidence online on Monday (Sept 19) about food safety issues at the university's canteen after students found assorted foreign objects such as cockroaches and worms in their food while eating, Zhihu, an online content platform, reported.

Back in June, students at the Southern University of Science and Technology started a survey about problems at the school's canteen.

The result showed that more than 60 per cent of 1,604 enrolled students and teaching staff were not satisfied with the quality of food served. More than 80 per cent were unhappy overall with the food and pricing.

A section of the survey on food safety issues revealed 67 disturbing incidents between 2020 and 2022, including worms in the food, diarrhoea after eating, unclean food, food not cooked properly, rotten food, and mice and cockroaches in the canteen.

In May this year, two unnamed students experienced diarrhoea from bacterial infections caused by food at the canteen.

There were also photos showing snails, batteries and rotten quail eggs in food served by the canteen.

In a disturbing WeChat post by an employee, it was announced the canteen would reduce the daily supply of vegetables in a bid to reduce the number of worms in the vegetables being served.

The university has yet to respond to these complaints publicly, even as public opinion was outraged by the allegations against the canteen after they surfaced online.

One person commented: "Oh my God! I get goosebumps when I see these disgusting photos." 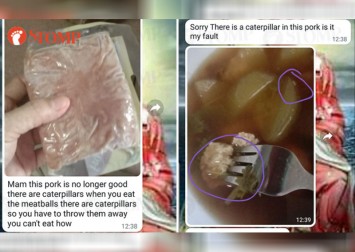 Another wrote: "How horrible the people who manage the canteen are. They must get a penalty."

Food safety on school campuses has long been a notorious issue in mainland China.

In June, 180 children at a kindergarten in northwestern China's Shaanxi province became sick after getting a Salmonella infection from food they were served there.